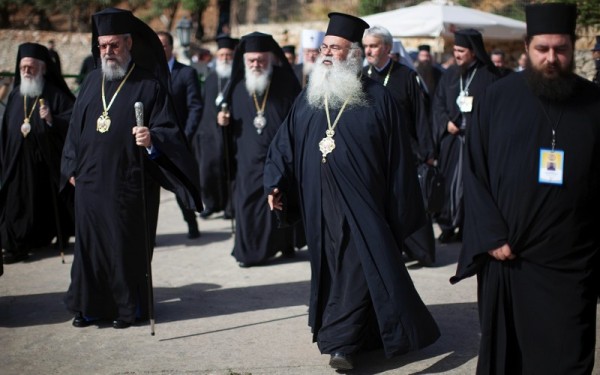 Last week we had our annual diocesan conference in Phoenix, AZ.  Although it was 45 degrees at the beginning of the week without a cloud in sight, by the end of the week it had cooled down to a comfortable 35 with a few showers—not the soaking, misty rain as we know it on Canada’s Pacific Coast, but rather big, heavy drops that fell about 30 centimetres apart and didn’t really wet the ground because the moisture evaporated before the next drop hit that spot.  But, it was rain nonetheless, so I can honestly say that even in Phoenix, AZ, early on a July morning, I was praying in the rain.

The big topic for conversation at the conference was the Great Council, or “The Meeting in Crete,” as we were encouraged to call it.  Our Metropolitan Joseph, who was supposed to be at this conference, was instead that a meeting of the Holy Synod of Antioch helping to frame Antioch’s response to The Meeting and provide a long explanation as to why Antioch did not participate, which can be read here (scroll past the Greek to the English version).   This statement was read aloud at the conference and discussed and explained to the clergy by those who have studied the matter.  While all of the reasons for Antioch’s inability to participate in The Meeting in Crete are reasonable and really do seem to necessitate Antioch’s non-participation, still it seemed to me that there was a palpable sense of disappointment among the clergy that something could not have been worked out.  It’s not that anyone thought the Holy Synod of Antioch had done the wrong thing.  Rather, it was disappointment that all of the leaders of the Church internationally couldn’t together find the humility to work things out before it got to this point.  As someone noted: “There is enough shame to go around for everyone.”

…While in the Church of God alone, for which Christ died and upon which he richly poured out the Holy Spirit, I found so many in great and boundless disharmony, both with one another and with the divine Scriptures.  And, what is most horrible, its very leaders are in such disagreement with one another in judgment and opinion, and act in such opposition to the commandments of our Lord Jesus Christ, mercilessly tearing apart the Church of God and unsparingly throwing his flock into confusion, that now if ever…is fulfilled the Scripture: “from your own selves will arise men who speak perverse things to draw away disciples after them.”

(From the first paragraph of “On The Judgement Of God”)

St. Basil in quoting St. Paul points, I think, to the real problem.  It is from our “own selves” that leaders arise in the Church.  And in these leaders we find the same weaknesses, sins, stubbornness, pride and willful ignorance that we find both among ourselves and within ourselves.  In as much as I am not humble, how can I expect the leaders who emerge from among “our selves” to be humble.  If I will not follow the Gospel commandments to go the second mile, give to those who ask and turn the other cheek, why would I expect this of my leaders.? Why would I expect those who come from among us to be any different from us?

A while ago I was sitting with a group of people who were complaining about the weaknesses of their priest.  I’m sure most of the complaints were accurate and that this particular priest had a steep learning curve in front of him—the same learning curve that all priest spend their whole ministry trying to climb.  After over an hour of listening to complaints, I asked the group a question:  How many of you are encouraging your own sons to become priests?  The room was silent.  And so, I pointed out to them, that although this man was willing to do what they themselves were not willing to do and were not willing to encourage their sons to do—to devote themselves to years of study with no hope of financial reward only to spend thirty or forty years in obedience to the bishop and under the scrutiny of a parish—that if they themselves were not willing to do this, perhaps they needed to cut their current priest some more slack.

Priests and bishops come from the people, from families, from mothers and fathers.  It just doesn’t make sense for us to expect a high level of holiness and Christ-like humility and wisdom among our leaders if we cannot find similar holiness, humility and wisdom among ourselves.  But here’s the good news: if we want saintly bishops and priests, all we have to do is become the saintly fathers and mothers that produce them and the holy aunts and uncles and brothers and sisters and friends that support and encourage them.

Actually, there has never been a time in the history of the Church when it has ever been much different.  Holy parents tend to produce holy children.  Sure, there are lots of exceptions both ways: holy parents with children who reject Christ, and holy men and women emerging from terribly ungodly families.  Sure, lots of exceptions.  However, the norm is that holy families produce holy children who grow up to be holy adults.  St. Basil the Great is an example of a holy leader of the Church who himself grew up in a very holy family.  His parents and grand parents are saints and four of his siblings were revealed as saints.  Holiness, generally, produces holiness.  And every now and then, God raises up holy mothers and fathers to produce holy men and women who grow up to become the voice and conscience of the Church.  And these holy leaders, like St. Basil the Great, come along when we need them; or rather, when we want them badly enough to produce them.

In the mean time, the Church muddles along.  And here’s an amazing thing.  Even without notable saints as leaders, the Holy Spirit still guides the Church, not only despite, but actually using the broken and messy and often retrograde work of sinful men who carry the same weaknesses and the same fears and insecurities as the rest of the Church from whom they emerged.  Many of the seven great Ecumenical Councils took years, even decades to complete (and then often with several mis-starts and false councils in between).  Who knows whether The Meetings in Crete are not the beginning of what may indeed turn out to be a Great and Holy Council on the same level of the early seven?  Who knows?  I  don’t.  But time will tell.

And as we wait for time to tell, I think there is a lot to be hopeful about.  At least our Church leaders are talking to one another.  At least issues that very few cared about, issues of great importance, are now being talked about and becoming better and more broadly understood.  At least we have begun.  And using the leaders that we, the married, child-producing part of the Church have provided, God the Holy Spirit is doing the best He can.  Who knows, maybe even now there are holy mothers and fathers raising holy sons and daughters who themselves will be the parents and leaders of the future Church?  Maybe even now, my own repentance, my own striving for humility and virtue will create a context from which men and women will emerge who will forsake all to follow Christ.  It seems the future of the Church, the future of the next Great and Holy Council (or the continuation of the one that has already begun) depends mostly on us, the people: the moms and dads, the brothers and sisters, the laity in general and the married priests and simple monastics.  We’re the one’s whose holiness or lack thereof determines the holiness of tomorrow’s generation of leaders in the Church.

At least that’s how it seems to me.