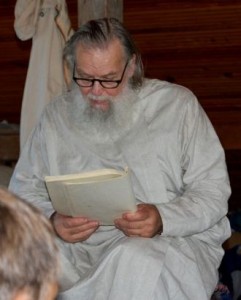 One of Russia’s most revered priests, widely considered a “dissident priest” for his strong criticism of the Russian Orthodox Church, was stabbed to death on Monday night in the northwestern town of Pskov.

Pavel Adelgeim, 75, was found dead by his wife late Monday, with the suspect still at the scene.

Local investigators said in a statement Tuesday that they were still unable to question the suspect due to the severity of his self-inflicted wounds. They confirmed that Adelgeim died from being stabbed in the heart, which caused severe blood loss.

The suspect, Sergei Pchelintsev, is believed to be mentally disturbed. When police arrived, he reportedly stabbed himself multiple times in the chest and elsewhere.

Pchelintsev, 27, came from Moscow, where he was studying film at the Russian State University of Cinematography and working on a documentary about murderers.

The two men apparently knew each other because of Pchelintsev’s mental condition, for which he had been seeking help from the priest. Adelgeim tried to persuade Pchelintsev to seek professional treatment after realizing the power of his words would be insufficient, however.

Adelgeim was one of few dissident priests who spoke out against what he saw as the rigid hierarchy of the resurgent Orthodox Church in Russia. His criticism didn’t go unanswered, ­however, and he was demoted after leading a local parish in Pskov for many years.

Speaking about the recent drive among members of the Russian government to become fervent Orthodox worshippers, Adelgeim said that they were “all just pagans,” referring to head of Russian Railways Vladimir Yakunin using the same term.

“They have nothing to do with Christianity. They can only hold a candle. A candlestick is just a candlestick. … They became so devout because they are all just one group of people, and the Russian Orthodox church has turned to the KGB’s ideology department,” he told Dozhd TV last  October.

Adelgeim gained more national publicity after expressing support for [deleted], whose members were charged with hooliganism after performing a “punk prayer” in Moscow’s Christ the Savior Cathedral. Two of the band’s members were sent to jail for two years.

“What these women did had a providential effect, as it unmasked the Orthodox Church’s unnatural bond with the Russian state,” he said in his blog in February.

Adelgeim said he had to deal with many incidents at churches he served in, including the ones with dances involved and that it had never let to criminal investigations.

All in all, Adelgeim said, the church changed very little since the collapse of the Soviet Union.

“There is a clear standoff between society and the Russian Orthodox Church, and it is the church that is responsible for it […] Take the [deleted] girls. Instead of just talking to them and teaching them how to pray, they put them into prison,” he said.

A spokesman for Patriarch Kirill, who heads the Russian Orthodox Church, said the patriarch was mourning the priest’s death and praying for his soul