Doctor Who Paints His Patients 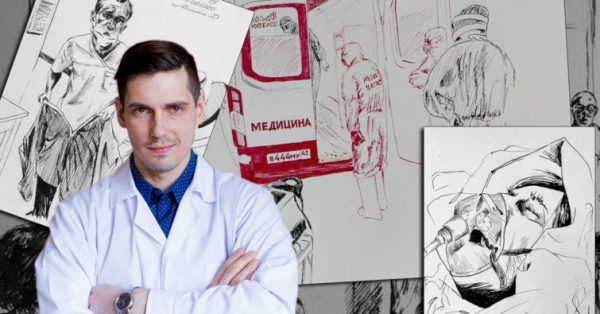 Ruslan Mellin is a specialist in maxillofacial surgery at the Kuzbass Clinical Hospital. He spent 17 days in a covid hospital in Kemerovo, during which he made about 20 sketches of his working days. All of these sketches are made with pen and ink.

In an interview with Pravmir, Ruslan spoke about how drawing helpeв him to distract from work, about the patients of the hospital and the “red zone”.

“I remember my first day at the covidarium: it was very difficult, I was not ready for such intensity. I was responsible for receiving and transporting patients, worked in the sanitary inspection room as a therapist of the admission department. We decided whom to send to therapy and whom to intensive care. In the first two hours alone we admitted about 50 patients.

The patients were different. There were those who wanted to be accepted first. They were mostly young people who tried to get ahead of the pensioners for examination.

Their relatives often called us with threats, saying things like we were not treating anyone right, that the doctor did not come to patients, and that they would complain and all of us would be fired. I explained to them that patients receive treatment, that this is not true. Our head doctor and the attending physician made rounds twice a day.

The only telephone number of the covidarium, which was known to all residents, was ours, of our sanitary inspection room, and I had to answer all of these calls. But we had a rule: patients and relatives must be listened to, and we must not hang up the phone first.”

“There have been deaths from COVID-19. Elderly patients were afraid of the coronavirus. I tried to cheer them up, said that they would get out of here in any case, that no one dies, everyone survives. 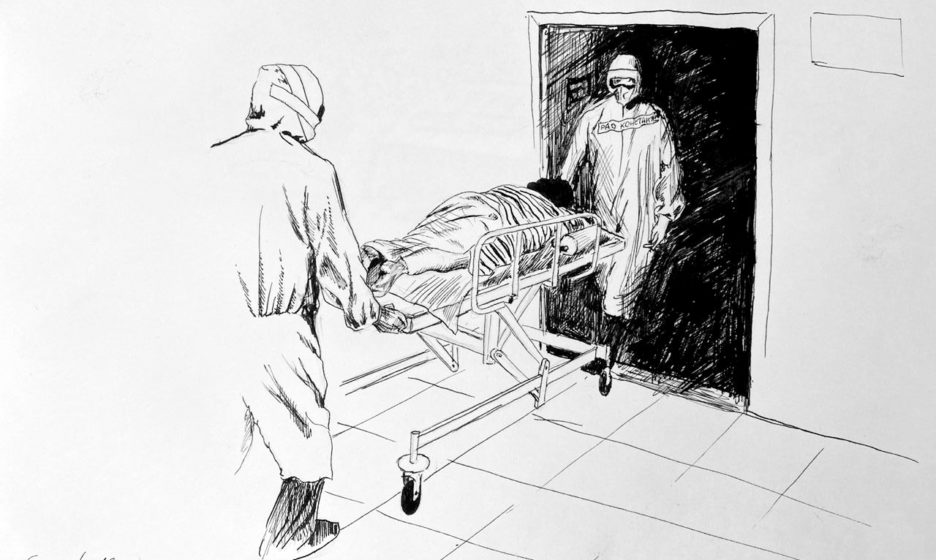 I have faced death before, we were trained for this during our student practice at the hospital. And I even remember that the doctor made us attend a consultation when he told patients with oncology that they had a month or two left to live. This was my first stress.

I sat and listened to his words: “In two months you will die, you have no chance of surviving.”

And here I felt very sorry for the elderly people from boarding houses, they came to us for 3-4 days, poorly dressed, unkempt. Almost all of them were non-walkers, they were moved on gurneys. Someone had no legs, others had no arms, someone could not speak due to some pathology. They only had a bag of diapers with them and nothing else.

I felt very sorry for them, and I decided that I would paint these patients in order to preserve memories of them at least in this way. 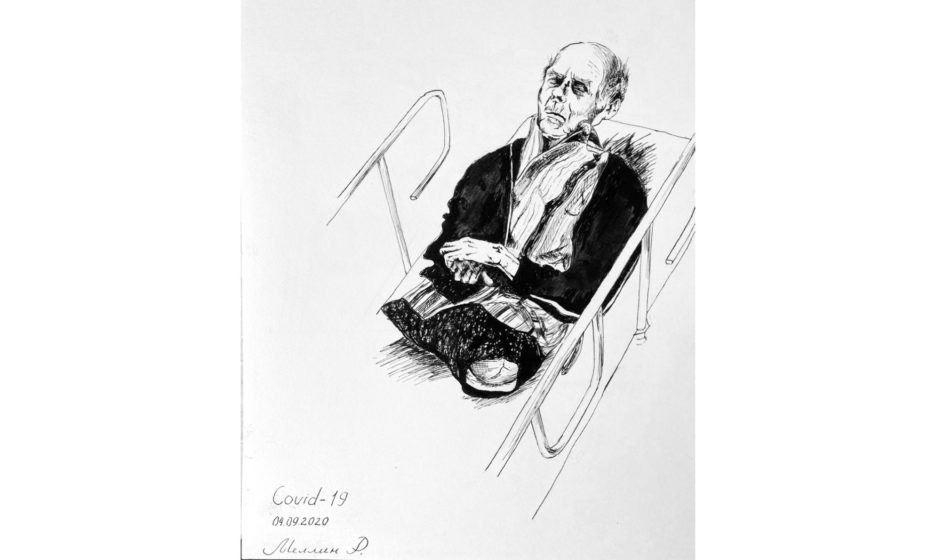 I remember an elderly man who had no legs, whom I received on September 3, and then I drew a picture of him. When he was discharged, I was about to go home. I wanted to talk, just talk to him, but he did not hear me, did not understand that I was talking to him. Here is this picture of an elderly man without legs sitting in diapers.”

I saw my son, who is a first grader, from the window

“It was very hard to be in gloves and in a rubber suit all day. On the second day, eczema began. On the third day I got sick, I had a runny nose. I had to endure it. My colleagues could only be distinguished by their eyes. But this is difficult, especially if you see the person on the shift for the first time. Therefore, they pasted stickers on costumes, on which it was written, for example, “Doctor Andrey” or “Nurse Natalya”. 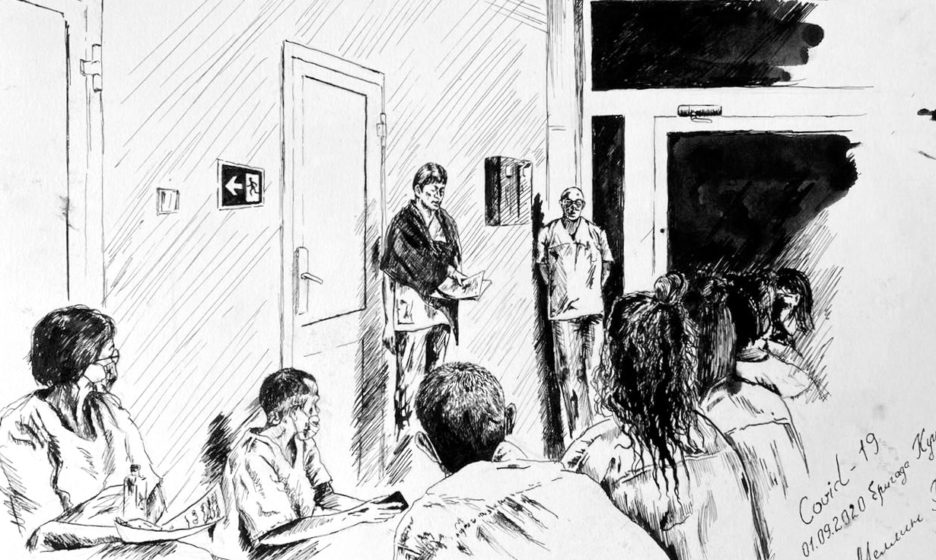 The mortality rate in our department was low, I think this is due to mutual assistance. There were 15 doctors in our team, all of them helped each other. Senior doctor Irina Nikolaevna Kushnir did not let anyone fall into despondency, she always helped. If there was an emergency, she herself came and helped do the paper work of admitting the patients.

I’m not afraid of getting infected with covid, because I have no concomitant pathologies, I am a young healthy person. But I’m scared of being treated in a closed covidarium. I want to go to the open world where everyone is free to walk.

Now I am in isolation in a sanatorium. If the test for COVID-19 is negative, then they can let me go home early, and spend the prescribed two weeks at home.

I don’t see my family in the sanatorium, I am isolated here. All 17 days of work, I did not communicate with my family personally, only by phone. I only asked that my son be brought in on September 1, I waved at him from the window. He went to the first grade this year, and I missed such an event.” 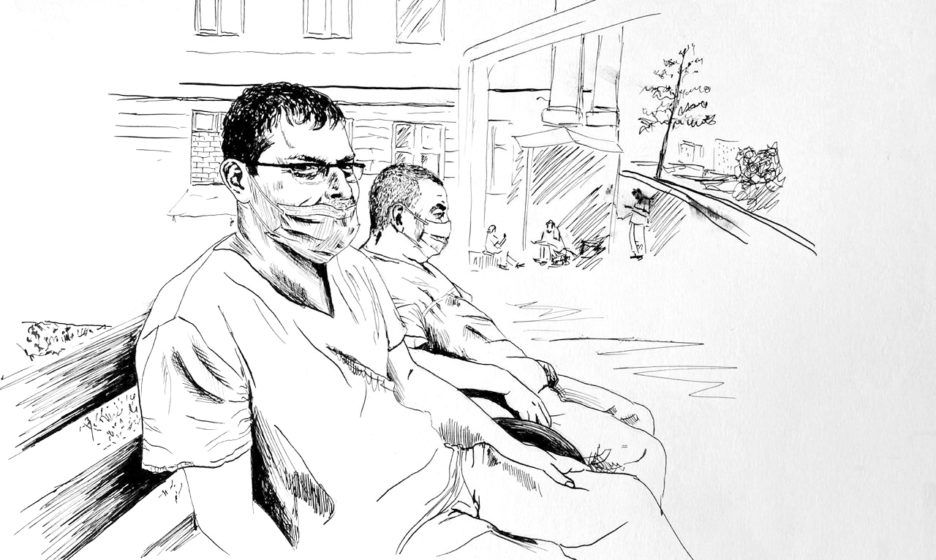 “For the first time I tried the technique of drawing with ink only in the covidarium. Due to drawings and immersion in creative work, it was possible to get rid of stress faster. After the shift, we had free time, and most doctors spent it on social networks in their gadgets. I’m not a fan of those. I had taken ink and pens with me, I thought I’d master this technique there, maybe it would work out. I painted pictures for myself. So that in 20 years, when I’m a pensioner, I can take them out, look at them and remember.

I only had red and black ink there. At first I didn’t want to use red at all, I don’t like it. But in one picture I had to take the red ones, because I wanted to show two sides: disaster medicine, which also deals with the transportation of patients, and those who receive patients, resuscitators. Our doctor is in the red car in the picture, he is examining a serious patient and is drawn in black ink. 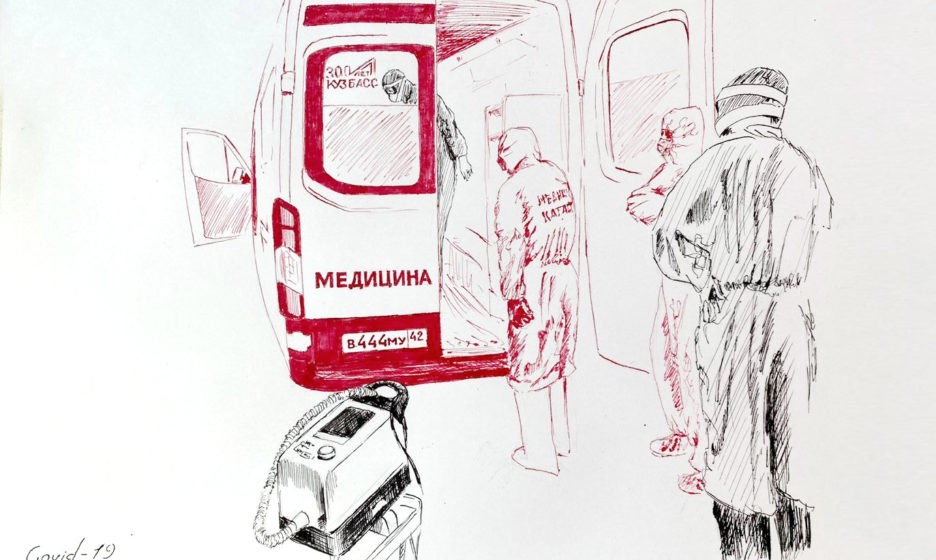 These are sketches. They are quick drawings, they cannot be called paintings. But they are finished, there is nothing else to add. At the same time, I really love detailed drawing and struggle with myself all the time: my inner voice tells me that it is not necessary, but my hands want to convey everything as accurately as possible. But this kills the picture, because it should not be drawn to the end.

Like any artist, I want to participate in exhibitions so that my paintings can be seen and discussed. But, unfortunately, I am denied this, perhaps precisely because I am not a professional artist.”

“I also play amateur hockey to distract myself from work, and I also signed my son to a hockey team. Sports and drawing are fun, I have no goal to make money from it. But sometimes I can paint on order.

I think I will return to the covidarium. Some of my colleagues have been there three times already. The break between shifts should be about a month, the main thing is that you come in healthy and not infect your colleagues. So next time I can go there around November.”