Don’t Poke the Bear: Three Reminders about the Reality of Demons 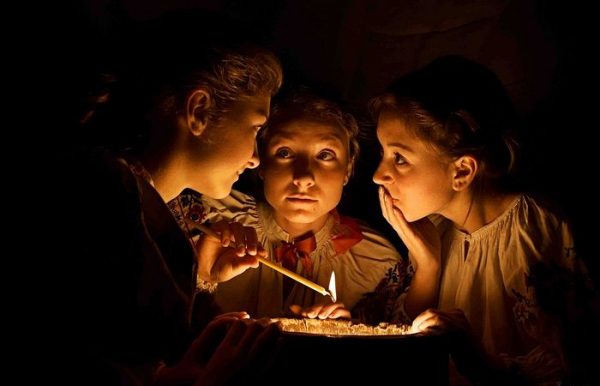 During a monthly visit over coffee with a local pastor friend of mine, I was a bit disturbed to learn of a new store that went up in a neighboring community that was dedicated to selling items used for witchcraft and seances.  As if that wasn’t enough, I was bombarded a day later with brochures describing an upcoming “Witches Ball” as well as invitations to a group that teaches people special dances to call upon the spirits for Halloween!   All of these events have led me to offer this small word of warning to anyone reading this:  Do not fall prey to this ignorance dear ones!

Our society at large tends to think of witches, demons, ghouls, and spirits as harmless games and fun. Orthodox Christians understand from experience however, that these things are incredibly dangerous.  When we are invited to events or parties that deal with spirits, whether it is organized in complete knowledge of what is being done, or out of ignorance in the spirit of fun, we have to ask ourselves: “Why would I go to poke the bear?”

As we get closer and closer to the end of October, allow me to give this annual public service announcement.  Demons and Evil spirits are absolutely, positively, without a shadow of a doubt, REAL.  They surround us like vultures, waiting to crash down on those who show either weakness in the spiritual life, or (worse yet) attacking those who playfully deny their existence.  With that in mind, here are three things to remember about the existence of demons and how we are to react to them.

In the very popular book “Everyday Saints”, the young student Tikhon talks about his experience with calling upon the spirits prior to his conversion to Orthodoxy.  His group of friends spent time researching and learning how to do seances so that they could establish a connection with spirits, and eventually they were quite successful!  In their seances, they would have conversations with entities that called themselves “Napoleon” or “Socrates”.  These spirits would even tell them intimate details about their personal lives as well as details about the future.  Tikhon and his friends didn’t truly know what they were getting into, but one thing was for certain…their moods changed after the seances began.  Depression and darkness that could not be described in words had slowly started to creep into their lives, and what started with innocent curiosity eventually ended in a very scary situation.

If you go looking for demons, they will find you.  St. Paisius of Neamt, an 18th century saint, once said:

“Do you not know with whom you battle?  How legions of invisible enemies surround you, and every one of them wages his own battle?  They sound numberless voices, and desire to swallow up your soul.  Should you not be cautious?  Is it possible that having drunk your fill and given yourself over to sleep, lying down and constantly consoling yourself, that you can with all of this, receive salvation?  If you will not be attentive to this…you will never escape their traps!”

2.)    The Only Thing that Demons are Capable of is Destruction

During one of the seances, the spirit of Nikolai Gogol, a famous Russian author, came into the midst of the students.  He was in tremendous pain, asking the students for help.  Being an author whom Tikhon and his friends greatly admired, they wanted to do everything they could to help him!  When they offered their assistance, Gogol asked them to join him so that they could help, and offered to find them some poison to drink.

This leads us to the second thing we must remember about demons, and perhaps the sole reason you do everything in your power not to “poke the bear”:  The only thing that demons are capable of is destruction.  They cannot love.  They cannot lift us up.  They cannot fill our lives with light or life.  Their only aim is to destroy.  This was the case with Tikhon and his friends, who had a demon ask them for life itself…seeking their destruction through suicide.

3.)    A Savior is Needed to Escape Their Destruction

Tikhon tells how as soon as the students realized what was going on, that the spirit of Gogol was asking for their lives, they ran.  Tikhon ended up running to the one place he knew he would receive deliverance:  The Church.

“I went to the Savior.  Using that name “Savior” so often, even Christians lose connection to the word’s original and real meaning.  But now, it was the most desired and most important word:  Savior.  We knew, however fantastic it might sound, that we were being hunted by powerful and unknown malevolent spirits, from whom only God our Savior could deliver us.”

When we run into any trouble in life, not just with an encounter with a demon, but even struggles of doubt, or health difficulties, or depression, we need to run to our Savior.  We run to the Church, which acts as a warm blanket of protection to the dark cold of the world.

The Church has given us so many weapons with which to combat the demons.  When the priest gets vested before a Divine Liturgy, he is literally putting on armor to combat the darkness!  As laity, each of us should also be the member of the NPRA (the National Prayer Rope Association), because our prayer ropes are an amazing weapon against the wiles of the enemy!  We must use these to our advantage as often as we can!

And so, as society gets ever closer to the end of October, be cautious dear ones, and do not poke the bear!  Rather seek consolation and love in the light that is offered to us every time we enter our prayer corners, every time we enter into Church, and every time we come into the Destroyer of Demons, our Lord and Savior Jesus Christ!