Easter reception is held at the Russian Ministry of Foreign Affairs 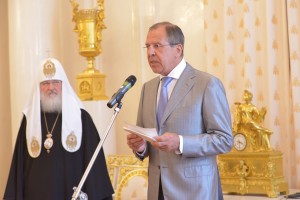 On 21 May 2013, a solemn Easter reception was held at the mansion of the Russian Ministry of Foreign Affairs, His Holiness Patriarch Kirill of Moscow and All Russia was met by Foreign Minister Sergei Lavrov. Moscow Synodal choir conducted by Alexei Puzakov, honoured artist of Russia, sang Paschal hymns.

All those present were greeted by Russian Foreign Minister Sergei Lavrov and His Holiness Patriarch Kirill of Moscow and All Russia, who spoke, inter alia, about violence against Christians in many countries and critical situation in Syria. The Primate of the Russian Orthodox Church called the world community to exert every effort to stop bloodshed and support open public dialogue aimed at the defence of peace and stability.

His Holiness called global economic crisis, which has affected many countries and even regions, another challenge being rooted also in spiritual realm. The healing of human souls would help to overcome the crisis.

Patriarch Kirill told those present about the main events in the external activities of the Russian Orthodox Church, including his recent visit to China, the first ever made by Russian patriarch. He mentioned the upcoming 1025th anniversary of the Baptism of Russia, reminding the audience that celebration of its millennium twenty-five years ago has heralded a new period in the history of the Russian Orthodox Church and adding that the anniversary will be widely celebrated in the three capitals: Moscow, Kiev and Minsk. Heads of the Local Orthodox Church have been invited to attend.

In conclusion, His Holiness thanked the Russian Ministry of Foreign Affairs and Mr. Lavrov for hospitality.