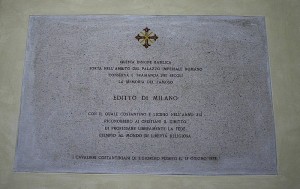 Plaque commemorating the Edict of 313, in Milan on the site of the imperial palace where it was promulgated. Photo by Giovanni dall’Orto.

The Ecumenical Patriarchate of Constantinople, in conjunction with the Council of the Bishops’ Conferences of Europe (CCEE), is commemorating the 1700th anniversary of the Edict of Milan by hosting a conference devoted to religious freedom.

The edict, issued by Constantine, granted “to the Christians and others full authority to observe that religion which each preferred.” The conference will be moderated by Cardinal Péter Erdö of Esztergom-Budapest and Metropolitan Emmanuel, who heads an Orthodox diocese in France.

“1700 years after the Edict of Milan, Christians are still dying in the world for their adherence to Christ, while in Europe the acts of intolerance and discrimination against Christians are on the increase,” said Metropolitan Emmanuel. “So we thought it appropriate to recall the anniversary of this important Edict for the history of Europe with a seminar which will enable us to take stock of religious freedom in Europe and the world, in the knowledge that Christianity is a gift for those societies which have welcomed it.”

Keynote speakers at the conference, which will take place in Istanbul on May 17 and 18, include scholars from Yale University and the Ambrosian Library; other speakers include representatives of the Jewish and Muslim communities and the Turkish government. A Maronite Catholic archbishop will discuss the situation of Christians in the Middle East.