Edict of Milan celebration to begin in Niš 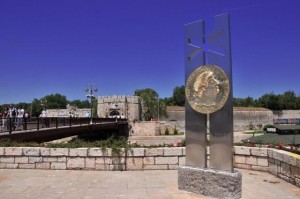 A memorial in Niš honoring Constantine the Great (Tanjug, file)

NIŠ — A reading of the Edict of Milan and a gala concert of spiritual music in Niš on Thursday night will open a year of celebration of 17 centuries of the document.

The Edict of Milan is a document on tolerance signed by Roman Emperor Constantine.

The audience will hear an address from co-chairmen of the organizing committee for the project dubbed “Edict of Milan 313 – 2013, Serbia” – Serbian President Tomislav Nikolić and Patriarch Irinej, who will officially open the year of celebration.

Russian Ambassador in Belgrade Alexander Chepurin will act as host for the evening, and the guests will include Serbian Prime Minister Ivica Dačić, cabinet ministers and the diplomatic corps.

The project’s manager Slavica Trifunović has said the ceremony will include several parts and begin with a reading of the Edict. Then the Moscow Sretensky Monastery Choir, one of the world’s best choirs, will perform an hour-long concert of sacred and secular music.

Roman Emperor Constantine the Great (272-337), born in Naissus (Niš), signed a legal document in 313 proclaiming religious equality and putting a stop to the persecution of Christians.

Serbia will mark 17 centuries of the Edict over the course of the entire year with theater performances, exhibits and concerts.