Source: Assyrian International News Agency
Waleed Abu al-Khair | 10 January 2015
This week's attack on the Church of the Virgin Mary in Minya, Upper Egypt, which killed two security guards, has been met with condemnation by Muslim and Christian Egyptians alike. 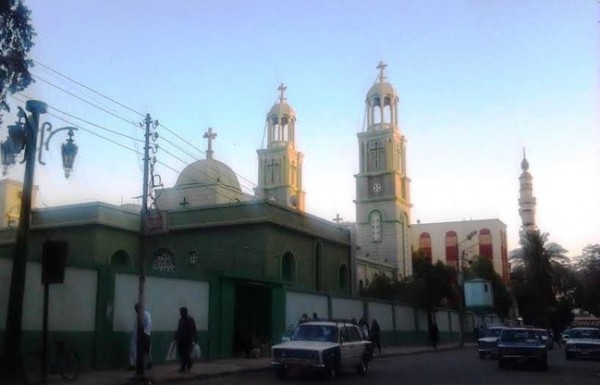 The two guards charged with protecting the church — one of whom was Muslim and the other Christian — were killed by masked gunmen a day before the Coptic celebration of Christmas.

“Terrorism does not discriminate between Muslims and Christians and proof of that is the latest terrorist attack on the Church of the Virgin Mary” where one of the victims was a Muslim police officer, said Rev. Sameh Iskandar from Mar Mina Church in Giza.

“Most churches are guarded by Muslim members of the police and this is not the first time they have given their lives to protect these places,” Iskandar said.

Egypt is united in its stance against such attackers, who “have no other goal but to destabilise Egyptian society and destroy its foundation, which has been preserved since ancient times”, Rev. Iskandar said.

On the evening of January 6th, 2015 which marks the Coptic celebration of Christmas Eve, Egyptian President Abdel Fattah al-Sisi surprised revellers by attending midnight mass at the Cathedral of al-Abassiya.

Al-Sisi embraced Pope Tawadros II, pope of the Coptic Orthodox Church, briefly interrupting prayers to address worshippers with a short speech, which he began with holiday greetings saying that he came to pay his respects to fellow Egyptian citizens.

Just days before the incident, as the Ministry of Religious Endowments was celebrating the birth of Prophet Mohammed, President al-Sisi called on Al-Azhar clerics to confront erroneous ideas and concepts that distort the principles of religion, Al-Khaleej newspaper reported.

Speaking to Al-Azhar Grand Imam Sheikh Ahmed al-Tayeb, he said, “You and all preachers are responsible before God for breathing new life into the religious rhetoric and correcting the image of Islam.”

Al-Sisi urged all Egyptians — both Muslims and Copts — to love one another and work diligently and conscientiously.

‘TERRORISM HAS NO RELIGION’

“All Egyptians have become targets for terrorists and those perpetrating such acts have terrorist and criminal motivations,” Al-Azhar Sheikh Mahmoud Abdel Saadi told Al-Shorfa. “Islam is innocent of them.”

Commenting on the Church of the Virgin Mary attack, Abdel Saadi said, “Those who attack churches and Christians are violating Muslim teaching, which makes respecting members of other monotheistic religions and preserving places of worship obligatory.”

“It is clear the brains of those committing such terrorist attacks have been washed and filled with lies and misleading fatwas,” he said.

The church and Al-Azhar are in constant communication and united against this “crime wave”, Abdel Saadi said, and they are working towards spreading “true and moderate Islam” through meetings at the highest levels, seminars and lectures by clerics from both sides.

Emile Shawqi, a Christian Egyptian who works as a public school teacher in Cairo, said terrorism has no religion.

Christians are “well aware that terrorists do not represent the Islamic faith at all and only represent their own criminal plans,” he said.

Maged Amr, a Muslim Egyptian who works in the import-export sector, told Al-Shorfa that as a Muslim, he renounces any form of terrorism.

“These groups are exclusively focused on spreading hatred among Egyptians,” he told Al-Shorfa. “However, events on the ground clearly prove the futility of their attempts and that Egyptians are on to them.”

Amr said he was personally willing “to protect my Christian neighbour’s house or the church at the end of the road where I live against any aggression”.