Source: Christian Today
Mark Woods | 07 September 2016
A Muslim MP in Egypt has submitted the first request to build a new church under a controversial law passed last week by the country's parliament. 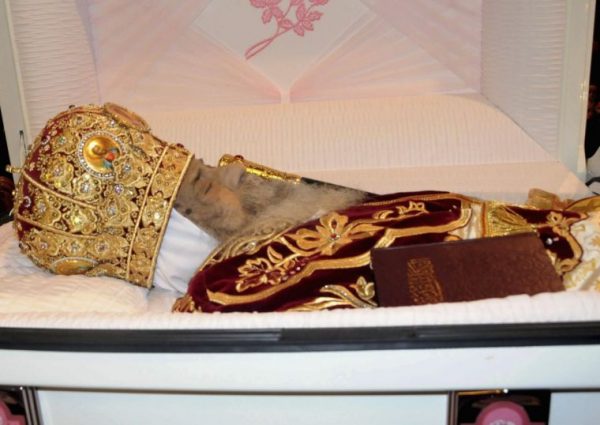 Reuters/The body of Pope Shenouda III, the head of Egypt's Coptic Orthodox Church for 41 years, rested in an open casket during his funeral service at the Abassiya Cathedral in Cairo March 20, 2012. A church may be built in his honour.

The law aimed at liberalising church building and renovation was hotly debated and received Church support only at the last minute amid fears it conceded too much to local opposition forces.

However, the independent MP for the Assiut region in Upper Egypt, El-Badri Ahmed Deif, told reporters on Saturday: “I wanted it recorded in history that a Muslim was the first to submit a request for building a church in Egypt after the passing of the new landmark law.”

According to AhramOnline, he said: “This request aims to build new bridges of confidence between Muslims and Christians and foster national unity in Egypt.”

He said he wanted to build the church in the village of Salam, which translates as ‘Peace’, the birthplace of the late Coptic Orthodox Pope Shenouda III.

“This great, moderate man was the pope of the Coptic Orthodox Church for 41 years, during which he lived in the tumultuous eras of late presidents Gamal Abdel-Nasser and Anwar El-Sadat, as well as former president Hosni Mubarak,” Deif said.

“In spite of his central religious status over these four decades, he never used his influence to build a church in his home village.”

There are more than 5,000 Christians living in the village of Salam and Deif said they need a church.

“I want to build a church in Salam to help these Copts perform their religious duties as well as to immortalise the name of Pope Shenouda, the son of this village,” he said.

The request will be submitted to the governor of the province. The new law says local governors must respond within four months and must provide clear explanations if they reject such requests.

Coptic MP Margaret Azer, deputy chairwoman of parliament’s human rights committee, said: “Deif’s request is a very good initiative from a Muslim MP who belongs to a governorate that includes a large number of Coptic Christians.”

“This initiative also reflects a high sense of national unity and this is what we hope for after the passing of the new church building law,” she said.

Church buildings have been targeted for destruction by Islamist activists. Many were destroyed in rioting during the chaos surrounding the ousting of Muslim Brotherhood President Mohammed Morsi and are being rebuilt by the government.

Egypt’s President Abdel Fattah el-Sisi has made better relations between Christians and Muslims a priority for his administration.

In a CBN video released on the Orthodox Christian Network, White – who was ordered to leave Iraq…