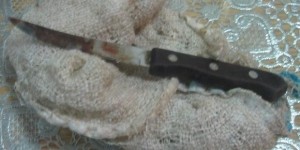 On 5 July 2013, four Coptic Christian men were killed by local residents in the Nagah Hassan district of Dab’iya village, some 18 kilometres west of Luxor.

Security forces stood by and failed to intervene during a brutal attack on Coptic Christians in Luxor, Amnesty International said in a briefing published today. During the sectarian violence, security forces left six besieged men –four of whom were then killed and one hospitalized – to the mercy of an angry crowd.

In an attack lasting 18 hours on 5 July, four Coptic Christian men were killed and four others were seriously injured. An angry mob armed with metal bars, knives, tree branches and hammers attacked Christian homes and businesses in Nagah Hassan, 18 km west of Luxor, after the dead body of a Muslim man was discovered near the homes of Christian families. Despite local residents’ and religious leaders’ repeated calls for help, security forces on the scene made only half-hearted attempts to end the violence and sufficient reinforcements failed to arrive.

“It is outrageous that this attack was left to escalate unhindered in this way. Amnesty International has documented a series of cases in the past where Egypt’s security forces used unnecessary force or live fire during demonstrations, yet in this case they held back even though people’s lives were threatened,” said Hassiba Hadj Sahraoui, Deputy Director of Amnesty International’s Middle East and North Africa Programme.

“A thorough, impartial and independent investigation must be conducted into the events in Luxor and the grossly inadequate response of the security forces to the attack.”

The violence began at 3am, shortly after the Muslim man was found dead in the vicinity of Christian homes. His family blamed the death on a local Coptic Christian. By mid-day more than 100 Christian homes had been attacked, with scores of them looted or torched. Local residents reported calling the police and army’s hotlines throughout the day in vain. Local religious leaders also approached other security officials.

“The attack went on for 18 hours, and there was not a door on which I did not knock: police, army, local leaders, the Central Security Forces, the Governorate. Nothing was done,” said Father Barsilious, a local priest from Dab’iya.

In one incident, security forces evacuated women and children trapped inside a house surrounded by an angry mob but left six men behind, apparently following demands from the crowd that the men remain. Four of the abandoned men were later stabbed and/or beaten to death and another required hospital treatment. Three other Christian men were hospitalized in separate violent incidents. One woman said she had begged police officers to save her sons who were left behind, but they ignored her pleas:

“I kissed the police officer’s hands and legs and begged him to protect my two sons and take them out… he completely ignored me and said he would only take women and children…. I buried my two sons in one day,” she said.

Other female relatives said they had given men their abayas (gowns) to try to disguise them as women so that they could escape.

Discrimination against Coptic Christians has been prevalent in Egypt for decades. Under President Hosni Mubarak at least 15 major attacks on Copts were documented. Sectarian violence continued under the Supreme Council of Armed Forces and following the election of President Mohamed Morsi. At least six attacks on Coptic churches or buildings took place in 2013 during the final months of deposed President Mohamed Morsi’s administration.

Investigations by the Luxor prosecution are ongoing. At least 18 men remain detained on charges of murder, attempted murder, destruction of property and ‘thuggery’, amid reports that some were beaten by security forces upon arrest.

“The continued sectarian violence in Egypt is an irremovable stain on the record of successive governments which have repeatedly failed to end attacks on minorities. Immediate steps must be taken to ensure the safety of Coptic Christians and other minorities,” said Hassiba Hadj Sahraoui, Deputy Director of Amnesty International’s Middle East and North Africa Programme.

“The latest attacks will test the new Egyptian authorities’ political will and their ability to break the pattern of inaction and injustice once and for all.”