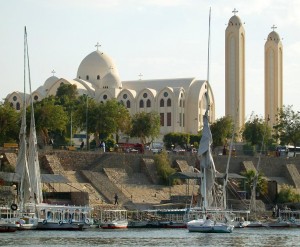 An Egyptian court has convicted a Coptic Christian lawyer in the southern province of Assiut on charges of blasphemy and sentenced him to one year in prison with hard labor.

The verdict against Roman Murad Saad was handed down on Saturday. It’s the latest in a surge of blasphemy cases following Egypt’s 2011 uprising.

Saad was sentenced in absentia. If he’s arrested or surrenders to authorities, he will be given a retrial and will have to pay 10,000 Egyptians pounds (around $1,400) in fines.

Court officials say Saad was found guilty of ridiculing Islam’s holy book, the Quran, at a lawyers’ union library. No further details were immediately available in the case.

The officials spoke on condition of anonymity because they were not authorized to talk to media.