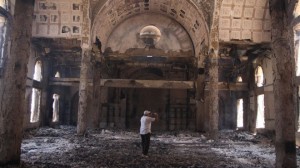 Aug. 15, 2013 – The damaged interior of the Saint Moussa Church after it was torched in sectarian violence following the dispersal of two Cairo sit-ins of supporters of the ousted Islamist President Mohammed Morsi, in Minya, south of Cairo, Egypt. (AP)

The Egyptian defense minister has ordered the repair and reconstruction of all churches that suffered damage in the country’s violent demonstrations since the Egyptian military removed President Mohamed Morsi from power last month.

Defense minister Col. Gen. Abdel Fattah El-Sisi intends to fix the damage to Coptic churches at Rabaa Adaweya and Nahda squares, according to a report by the Mid-East Christian News.

Dozens of churches were attacked and burned in riots after thousands of demonstrators took to the streets of Cairo and other Egyptian cities to demand the end of what they call military rule, following the removal of Morsi on July 3. Many of Morsi’s supporters have voiced criticism at Egypt’s Christian minority for largely supporting the military’s decision to oust him from office.

“The Egyptian defense minister ordered the engineering department of the armed forces to swiftly repair all the affected churches, in recognition of the historical and national role played by our Coptic brothers,” read a statement that aired on Egyptian television.

Bishop Mousa thanked Sisi for his efforts to repair the damaged churches.

“We thank Col. Gen. Sisi for commissioning the brave Egyptian armed forces to rebuild the places of worship damaged during the recent events,” Bishop Mousa said on Twitter.

17 deaths were reported Friday after several days of violence that caused more than 638 deaths and 4,000 injuries in clashes between Morsi supporters and Egyptian military forces.

The Maspero Youth Union, a Coptic Christian youth movement, says there’s a “retaliation war” against the religious minority, which makes up around 10 percent of Egypt’s population, according to a report by AFP.

The Egyptian Initiative for Personal Rights (EIPR), an Egyptian NGO, says at least 25 churches were torched this week, and attackers also targeted Christian schools, shops and homes across all 27 provinces.

The Associated Press and AFP contributed to this report.