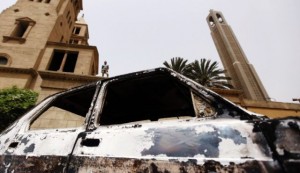 A car burnt in clashes between Muslims and Coptic Christians in April lies in front of Cairo’s main Coptic Cathedral. Photo by Reuters

Violent clashes across Egypt have been taking place not just between the supporters and opponents of deposed President Mohammed Morsi of late. During times of upheaval, the Coptic Christians in Egypt always suffer abuse, and now is no exception. The Coptic community comprises roughly 10 percent of Egypt’s population of 80 million. They belong mostly to the Coptic Orthodox Church although some subscribe to Greek Orthodoxy. The Copts live primarily in Egypt’s largest cities, Cairo and Alexandria.

Since the beginning of the 2011 revolution that toppled Hosni Mubarak, they have suffered constant harassment, and dozens have lost their lives to violence. Their churches have been torched. Coptic women have been beaten, forced to wear hijabs, or forcibly converted to Islam, according to human rights organizations.

The Muslim Brotherhood has taken a public stance against the targeting of Copts. Not only did Morsi condemn violence against the group during his presidency, he appointed numerous Copts as ministers and advisers in his government. The main group antagonistic to the Copts has been the Salafi movement, a conservative Islamic group that recently joined the liberals in coalition against Morsi.

The central flashpoint in a sea of instability of the past week is Luxor, a tourist city in south-central Egypt. One person was killed there, and 23 Coptic homes were torched. The Egyptian army has been guarding the local church, to prevent it from being set aflame as well.

A Coptic Christian priest was shot dead in the lawless Northern Sinai on Saturday, sources said, adding that they believe the shooting is the first sectarian attack since Morsi’s ouster. The shooting in the coastal city of El Arish was one of several attacks believed to be by Islamist insurgents that included firing at four military checkpoints in the region, the sources said.

Since Morsi’s his ouster, the Muslim Brotherhood has fiercely criticized Coptic Pope Tawadros, spiritual leader of Egypt’s 8 million Christians, for giving his blessing to the removal of the president and attending the announcement by armed forces commander General Abdel Fattah al-Sisi suspending the constitution.

In Cairo things have been relatively quiet, but the Copts there are terrified. In a widely circulated YouTube clip taken from Egyptian television, a pro-Morsi demonstrator in a niqab face covering threatens to burn all the Christians in the world, saying they cause conflicts among Muslims. This is not just empty talk. On Saturday morning, a large police contingent was dispatched to the Copt neighborhood in old Cairo.

46-year-old Ibrahim Halil sits quietly on the street. He has made his living in tourism. In the past, he has offered tour guide services, sold souvenirs, and even operated a money changing booth. There are no tourists anymore. After losing his livelihood, he is weary of the clashes that will surely come. “They will come here one day, I know,” said Halil. “They’re crazy. They hate the Christians. They think Islam is the only religion, and everyone who doesn’t believe in Islam must be killed.”

Halil has a 15-year-old daughter. “Sometimes they shout at her in the street: ‘heretic,’ and ‘cover your head,'” he recounted. “She has not been attacked, but it could happen. It happens to people everywhere.”

Nadia Daif, a woman in her fifties, sits near the ancient cemetery. She is not employed. “I’m not afraid. Our youth are strong, they will defend me. They can start to attack us for so many reasons, but there is police here, and we have our young men, and it will be okay,” she said. Daif supports the military’s ouster of Morsi. “Look how empty [of tourists] it is here. There is no food. People have no food.”