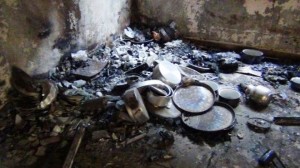 Earlier this month, four Copts were murdered and 23 houses of Christian families looted and burned in the southern Egyptian village of Dabaaya. Copts say the violence against them has worsened since the ouster of President Mohammed Morsi. (MCNdirect.com/Ramy)

Egypt’s Muslim extremists, angry over the ouster of Mohammed Morsi from the presidency, have zeroed in on the nation’s Christian minority, scapegoating them even though the Islamist leader was widely unpopular.

On Thursday, the body of a Christian merchant abducted last week from the town of Sheikh Zweid was found decapitated in Egypt’s northern Sinai Peninsula. The grisly discovery came as attacks on Copts and their churches have escalated amid rumors that Christian leaders masterminded Morsi’s removal.

Historically, Egypt’s Coptic community, numbering only six to 12 million, approximately 10 percent of the country’s 85 million population, have faced severe marginalization and often have been imprisoned and tortured for their Christian faith. While they were undeniably part of the movement that ultimately pressured the military to oust Morsi, they were hardly alone.

“Egypt’s Christians played an important role in ousting Morsi,” said Khairi Abaza, a senior fellow at the Foundation from the Defense of Democracies based in Cairo. “They were part of the 20 to 30 million Egyptians who took to the streets, showing that Egypt is united despite its diversity, and that it is their country as much as any Muslim.”

Pope Tawadros even made a televised speech supporting a timeline for Egypt’s future shortly after interim president Adli Mansour was sworn into office. He is being hailed as courageous, as his predecessor, Shenouda III, had encouraged Copts to keep out of politics and the public eye for fear of backlash and retribution.

“There could be concerns of retaliation against Christian individuals or churches by some extremists who could use them as targets to express their anger at the ousting of Morsi,” Abaza said.

Muslim Brotherhood factions inside the country have harshly condemned Pope Tawadros for openly supporting the removal of Morsi.

Among the Egyptian people, however, there is more hope of reconciliation between Muslims and Christians, according to Abaza.

“There is a stronger solidarity between Christians and Muslims in countering extremism. These last two years were a wake up call for both moderate Christian and Muslims that national unity is in danger,” he said.