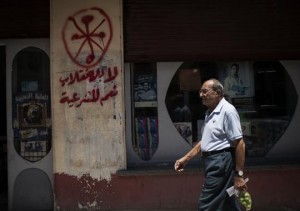 An Egyptian man walks in front of a pharmacy marked with anti-Coptic and anti-coup graffiti in Assiut, Upper Egypt.(Photo: Manu Brabo, AP)

CAIRO – Stained glass windows generated a luminous glow inside a Coptic Christian church one recent morning as prayers were chanted in steady hums and incense wafted through the nave, soothing worshipers.

But the serenity only masked the unease here. Since the July 3 coup that ousted former president Mohammed Morsi of the Muslim Brotherhood, Christians have faced a spike in violent attacks that Egyptian authorities have not prevented, rights groups allege.

“I’m very afraid, and I’m afraid for my daughter,” said Mona Roshdy, 55, as she left the church with her family.

She had reason to be. On Wednesday, as the police in Cairo assaulted two protest camps of the Muslim Brotherhood’s, Morsi supporters directed their anger at Christians.

Churches, houses, monasteries, orphanages, schools and businesses belonging to Copts were attacked in nine provinces “causing panic, losses and destruction for no reason and no crimes they committed except being Christians,” the Maspero Youth Union, a Coptic activist group, said Thursday.

“With all compassion I urge everyone to conserve Egyptian blood and ask of every Egyptian to commit to self-restraint and avoid recklessness and assault on any person or property,” Tawadros wrote on his official Twitter account Monday.

Youssef Sidhom, editor-in-chief of the Christian weekly Watani, said the recent attacks are painful and vicious but it be worse if they are allowed to divide the two faiths.

“Christians shouldn’t be moved by this, shouldn’t be dragged to fulfill the target that lies behind this, which is segregating the national solidarity between Christians and Muslims in the very difficult time Egypt is passing through,” Sidhom said.

Christians make up about 8 million of Egypt’s population of 80 million and have been victims of Muslim attacks for years. Some Christians were worried when Islamists took over Egypt’s government in 2012 and relieved when the military ousted them from power last month.

But the ancient Coptic communities here that predate Islam by centuries say they now see a new wave of violence against them since the ouster.

In Upper Egypt – a swath of arid land from south of Cairo to Sudan that is home to many hard-line Islamist Egyptians – four Christians were killed when a mob of several hundred people in the Luxor governorate attacked with knives, tree limbs and hammers two days days after the overthrow of Morsi, Amnesty International said.

In a village in Upper Egypt’s province of Minya, an argument erupted between Muslim and Christians over a pro-military song playing in a coffee shop last week. The next day thousands of people ransacked Christian homes and stores, the Associated Press reported.

And in the north Sinai Peninsula, a hotbed for growing militant activity, an orthodox priest was murdered last month. There were attacks in Port Said and Marsa Matrouh as well.

“The Christian people are worried about the situation,” said Adly Rizk, 53, on a Sunday outing with his family in the capital.

Standing outside the towering Cairo church, not far from one of the pro-Morsi protest camps, Roshdy pointed to a batch of graffiti written on the building’s protective walls: “Egypt is Islamic,” said the markings written in red Arabic letters.

Morsi’s supporters spray-painted the phrase on other Christian properties, too, as they marched last week across the city, Roshdy said.

Roshdy says she doesn’t leave the house in the evenings after seven. She doesn’t wear jewelry except for a basic gold ring because she is worried about theft, and she won’t let her daughter, 21, go out alone.

Many Christians participated in massive protests against Morsi at the end of June, and Tawadros sat with a row of officials behind Gen. Abdel Fattah Al-Sisi when the army chief gave his speech that overthrew Morsi.

In a 15-minute audio recording posted online earlier this month, al-Qaeda chief Ayman al-Zawahri accused Coptic Christians, the military and secular-minded elites of conspiring against Morsi because he is an Islamist.

“Copts are paying the price of the inflammatory rhetoric against them coming from some Islamist leaders and supporters of the former president, who accuse Coptic spiritual leaders of conspiring to foment army intervention to remove Dr. Morsi,” said Ishak Ibrahim, officer for freedom of religion and belief at the Egyptian Initiative for Personal Rights, in a report.

“I’m not scared, but I’m very sad about the situation in the country – the relationship between Muslims and Christians,” said Margaret Naby as she walked into church on Sunday. “There is so much fanaticism.”

Egypt is home to wider sectarian unease that authorities don’t control. In June, four Shiite Muslims were beaten to death by a mob of Sunni Muslims, apparently for their beliefs, in a village near the capital, in Giza.

“The Egyptian government should make ending sectarian violence a priority, or risk letting this deadly problem spiral out of control,” Nadim Houry, acting Middle East director of Human Rights Watch, said in a recent report about attacks on Christians.

“Prosecutors should thoroughly investigate and prosecute those responsible, including security forces, if they want to show they are capable of preventing future bloodshed,” he said.

“This negligence reveals that the pattern of impunity which spread during the Mubarak era and remained in place throughout the rule of the Muslim Brotherhood continues to this day, even after both of these regimes were overthrown,” a statement by the groups said.

Coptic activist Mina Thabet said that if the state maintains a passive attitude and does not try to end violence or protect citizens, people will take to the streets again to demonstrate against the government – underscoring widespread impatience with the state that fueled ongoing instability since the uprising against Mubarak.

“Where’s the change?” Thabet asked, suggesting he expected rapid improvements. “Until now, I did not see any development in the country.”

But some Christians had put concerns about attacks aside, instead simply glad that Morsi was ousted and the Brotherhood is no longer in power.

“Under the Brotherhood’s rule, things were difficult for Christians,” said Mina Makroush, 25. “I’m not afraid now because the Brotherhood government was removed.”

Others say they want to leave the country.

In Coptic Cairo, which was a Christian stronghold until the 7th-century rise of Islam, Zarour Ayzut Dawoud propped her son on her hip as she visited the place where Mary, Joseph and baby Jesus are believed to have stayed when they escaped King Herod’s execution of young male children in the vicinity of Bethlehem.

“I want to go to America,” said Dawoud. “The situation in Egypt is no good.”

Peter Fakhry, 22, said the feeling is shared by non-Christian Egyptians.

“Many people want to leave – Christians and Muslims, too, because of the situation and lack of work,” he said.

“Do you see this? There are no tourists,” he said about the Coptic site that is no longer as much a residential space as it is a place for visitors, who come to see relics of an almost forgotten past in which Egypt was dominated by Christians.