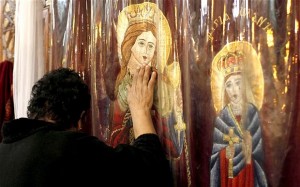 Tens of thousands of Egyptian Christians are leaving the country in the wake of the Egyptian revolution and subsequent Islamist takeover of politics, priests and community leaders say.

Coptic Christian churches in the United States say they are having to expand to cope with new arrivals, as priests in cities like Cairo and Alexandria talk of a new climate of fear and uncertainty.

“Most of our people are afraid,” Father Mina Adel, a priest at the Church of Two Saints in Alexandria said. “Not a few are leaving – for America, Canada and Australia. Dozens of families from this church alone are trying to go too.”

Father Mina’s church has an important place in the history of the Arab Spring. It was struck by a car bomb on New Year’s Eve 2010, Egypt’s worst sectarian attack in recent decades, in which 23 people were killed.

After the bombing, liberal Muslim groups staged protests in support of Christians, printing posters showing the cross and the crescent interlinked which then went on to be symbols of inter-faith unity during the Tahrir Square protests three weeks later.

But the victory of the Muslim Brotherhood in parliamentary and presidential elections has changed the mood – particularly as the biggest opposition party is the even more hardline Salafist movement which wants strict Sharia law implemented.

“Salafis meet Christian girls in the street and order them to cover their hair,” Father Mina said. “Sometimes they hit them when they refuse.”

President Mohammed Morsi has promised to respect Christians’ rights, and issued a New Year message insisting Egypt was “one homeland for all”. But several Brotherhood leaders and clerics issued thinly veiled threats against them during protests in late 2012, accusing them of being part of a plot to overthrow the government.

The biggest change in attitudes has come since the passing of a new constitution giving Sharia law more prominence.

“With the new constitution, the new laws that are expected, and the majority in parliament I don’t believe we can be treated on an equal basis,” said a congregation leader in Cairo’s Church of St Mary and St John the Baptist.

He said he knew a dozen families who had left already and 40 or 50 more friends who had applied – including, he added, liberal Muslim families who were also unhappy with the prospect of more restrictive laws.

There were 2 Coptic churches in the United States 40 years ago, whereas there are now 200.

The most recent opened in Arlington, outside Washington, last year. “We are trying to accommodate all of the new arrivals,” said Atef Yacoub, a member of the area’s Coptic community. “People are coming and staying by applying for asylum or seeking employment visas.”

The United States, like other countries, does not distinguish visa applications by religion, so there are no absolute figures. One estimate put the number of Coptic emigrants in 2011 at 100,000, of whom more than 40,000 went to the US.

“There is no body counting those who leave the country, neither on the Coptic side nor on the part of our embassies abroad, so it’s all just guesswork,” said Ahmed el-Qoasni, former assistant foreign minister for Egyptians abroad.

For most Christians, estimated to number between 6-8 million of Egypt’s 85 million population, flight is not an option, and many say the fear of Islamist takeover is worse than the reality so far. Most Christians are as poor as other Egyptians, currently afflicted by an economic as well as political crisis.

Nader said things could improve and he could still change his mind. But he added: “As Christians, we are in God’s hands, but I have a daughter, and I want her to be safe too.”