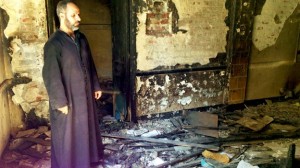 Khamis had no other choice than to leave his house in the village of Dalga, near the central Egyptian city of Minya. After an arson attack on his cousin’s house and the fatal shooting of another relative, he fled into hiding with his wife and six children.

He said they had been singled out for no other reason than being Christians.

“It was a terrible night,” recalled Khamis, who agreed to talk to us but did not want to be identified. Khamis is not his real name.

Khamis recounted what happened on the night of 3 July, when the army deposed Islamist former President Mohammed Morsi.

“Angry mobs and thugs rampaged through houses owned by Christians. They started with the house of my cousin, looting and setting it on fire. We weren’t taking any chances – we fled the village.”

Since Mr Morsi was forced from office, there has been a string of attacks on Christians in different provinces.

Local Copts say they have been singled out by radical Islamists, for campaigning against the former president and his Muslim Brotherhood movement.

On 6 July, a priest was shot dead by gunmen in an outdoor market in northern Sinai.

Five days later, the body of a beheaded Christian man was found in the same area, where Islamist militants have launched a string of attacks on security and military posts since Mr Morsi’s overthrow.

Arson attacks on Christian houses and shops have also been reported in remote southern villages, where Islamist hardliners hold sway.

The violence included a church in Dalga, 350km (220 miles) south of Cairo.

We visited the site and found a burned-out shell, ransacked and blackened by fire.

The church’s priest, Father Ayoub Youssef, told us what happened the night Mr Morsi was removed from power.

“They stormed the church chanting slogans accusing Christians of campaigning against Morsi like ‘Shame on you Christians! You traitors conspired against the president. You are doomed!’

“They looted everything – benches, ceiling fans, windows and even toilets. They smashed a statue of the Virgin Mary, before setting the whole building on fire.”

Father Ayoub was grateful to Muslim neighbours for saving his life.

“They helped me escape from the roof to their house. Had it not been for them, I would have been lynched,” he said.

Egypt’s Christian minority, estimated at around 10% of the 85 million population, has felt vulnerable for decades.

For a long time they steered clear of politics. But with the recent dramatic changes to the political scene, they have become more active.

The new Coptic Pope, Tawadros II, openly criticised the ousted president, calling him a divisive figure who had set Egyptians against one another.

He blessed the president’s removal and was in attendance when General Abdul Fattah al-Sisi, the defence minister, announced Mr Morsi’s removal from office.

Father Ayoub said being politically active or associated with opponents of the former president was not an excuse to take innocent lives.

“If you are attacked because of your political affiliations, I really don’t know what the world is coming to,” he said.