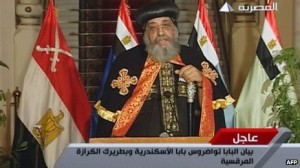 A bishop in Egypt’s Coptic Church says Pope Tawadros II has cancelled weekly public meetings due to concerns over possible attacks on his congregation.

Bishop Angaelos, who heads the Church in the UK, says in one incident the flag of al-Qaeda was raised on church property while worshippers hid inside.

Some Islamists say the Church backed the removal of President Morsi.

Two weeks ago Bishop Angaelos told the BBC that he didn’t mind what kind of government led Egypt – even an Islamist one – as long as individual rights were respected and the country was able to flourish.

Now the bishop has revealed that the Church’s leader, Pope Tawadros II, has cancelled some public events at St Mark’s Cathedral in Cairo because of the worsening security situation.

Pope Tawadros is concerned about the risk of potential attacks on the Coptic congregation.

Egypt’s Christians have long been a target for disaffected Islamists, many of whom now openly accuse the Church of playing a role in the recent removal of President Mohammed Morsi.

When the chief of the army, General Abdul Fattah al-Sisi went on television to announce that President Morsi had been removed from power, Pope Tawadros and Ahmed Al-Tayeb, the Grand Sheikh of Al-Azhar, Cairo’s ancient seat of Muslim learning, both made statements.

Pope Tawadros said that the “roadmap” mentioned by the general had been devised by honourable people, who had Egypt’s best interests at heart.

Some Islamists took this as a sign that the Church had conspired in their leader’s overthrow.

The events that Pope Tawadros has cancelled are thought to be Bible lectures, where he takes questions from the congregation gathered inside St Mark’s Cathedral.

Recent incidents cited by Bishop Angaelos include an attack on a church which left the congregation cowering inside while the flag of al-Qaeda was raised on its premises.

He says homes and businesses have been destroyed and callers to TV shows have openly demanded the eradication of non-Muslims.

The groups said that the traditional method of stopping violent attacks by using mediation was not working.

They have called for an independent investigation into why Christians and their property are not being adequately protected by the security forces.