Egypt’s Copts putting on a brave face amid political standoff 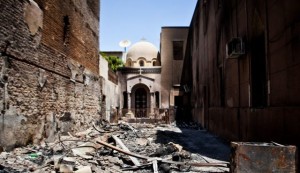 The Amir Tadros Church in Minya, some 250 kilometers south of Cairo, which was set ablaze on August 14, 2013. Photo by AFP

As clashes between the Egyptian army and the Muslim Brotherhood lead to bloodshed, the Christian Copts in Egypt are also suffering from violence.

The 17 million Christians in Egypt, a fifth of the population, have seen some 80 churches and monasteries set on fire since the beginning of last week, especially in southern villages and in Cairo and Alexandria. Western media outlets have reported the torching of some 50 churches and widespread looting, but Al-Wafd, the mouthpiece of a centrist secular party, has reported the number of events to be even higher.

Joseph Malak, an attorney heading a research center and human rights movement, as well as being one of the leaders of the Christian Copt community, told Haaretz that the arson was orchestrated violence. “The object of the Muslim Brotherhood, as we see it, is to cause terror and fear and push the country into a violent, ethnic struggle. They expect the Copts to react, thus leading the country into a dark tunnel, with no apparent solution.”

Malak says that the Copts did not fall into this trap: “People did not go out to demonstrate, and there were no acts of revenge; on the contrary, the head of the Christian Church clarified that the Copts would not react violently, but would rather do their best to seek calm and prevent bloodshed. He added that the churches set on fire were a sacrifice on the altar of the liberty of the Egyptian people.”

Attacks on Copts’ property and churches are a reoccurring phenomenon whenever there is an heated political struggle in Egypt. On the eve of the revolution that led to the downfall of Hosni Mubarak an explosive went off in a Coptic Cathedral in Alexandria during New Year’s prayer. The government accused the Salafi organizations, but some believed that the government itself was involved, hoping to deter Egyptians in general and Copts in particular from joining anti-government demonstrations. In the past two years clashes broke out due to personal conflicts between Christians and Muslims, which included damage to churches and property. In most cases the government and police were helpless, failing to prevent the violence.

In the past two years Copts have taken to the streets to demand the protection of their rights, but since Mohammad Morsi was elected, many opted to emigrate to Western countries. This trend has halted in recent months, but following recent violence community leaders again fear a massive exodus. These fears caused the army and government to decide to fund renovation of the damaged churches, and save the communities’ extra expenses.

According to estimates of human rights organizations and the Christian Copt community, some 3 million Egyptian Christians live abroad. “It’s true there was emigration in recent years, but this does not mean that Egyptian Copts will give up the homeland, property and citizenship,” Malak says. “We believe that dozens of millions of Egyptians, including Muslims, see us all as one nation.”