The new pope of Egypt’s Orthodox Coptic church has been enthroned.

Pope Tawadros II, 60, was elected earlier this month, but the televised official enthronement ceremony was held Sunday at the Coptic cathedral in Cairo. He replaced Shenouda III, who died in March after leading the ancient church for 40 years. 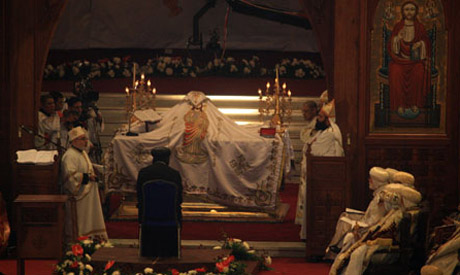 Egypt’s Christians make up about 10 percent of the nation’s estimated 83 million people, making them the largest single Christian community in the Middle East.

Christians have long complained of discrimination, particularly in the last four decades as the country’s Muslim majority moved toward religious conservatism. The rise to power of Islamists after the ouster nearly two years ago of authoritarian leader Hosni Mubarak has deepened their concerns amid increasing attacks targeting their churches and businesses.

Amid increased fears about the community’s future after the overthrow of Mubarak, Tawadros will be its main contact with Islamist President Mohammed Mursi.

Tawadros told Al Arabiya earlier this month that the security situation, not the dominance of Islamists, is what prompts Egyptians – Christians and Muslims alike – to leave the country, new.

While Shariah (Islamic law) is not applicable to Christians in Egypt, Tawadros rejected article 2 in the constitution , which states that the “principles” of Islamic Sharia law are the main source of legislation.

He said article 2 will not grant Christians in Egypt their rights.

The marginalization of Christians is what has compelled his predecessor, Pope Shenouda III, to take more of a political role.

But he is uninvolved in politics, he said, adding that the Church as an institution is spiritual and not political.

He also made comments regarding Egypt’s relations with Israel. He said there are no planned trips to Jerusalem and if there are, Egyptian Christians and Muslims will go together.

Most viewed articles
An Extraordinary Session of the ROCOR Synod of Bishops Convenes156
How to Get Rid of Spiritual Infantilism?101
How to Respond to Opposition to the Gospel98
A Piece of Rock Falls Down on the Skete of St. Anna on Mt. Athos83
His Beatitude Metropolitan Tikhon Issues Statement on Tragic School Shooting in Texas60
PRAY: 14 Students, One Teacher Dead After Texas Elementary School Shooting49
Romanian priests in Madrid draw conclusions on the benefit of praying together with family members39
Three Words26
test1
Most popular authors
Pravmir.com team239
Priest Andrei Chizhenko101
Archpriest Basil Ross Aden98
Metropolitan Tikhon of All America and Canada60
Associated Press49
Aurelian Iftimiu39
Archpriest Geoffrey Korz26
Maria Trushanina1