What does the Lord seek from you but to do justly, and to love mercy, and to walk humbly with your God? Micah 6:8 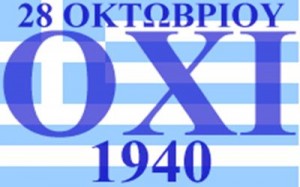 To the Most Reverend Hierarchs, the Reverend Priests and Deacons, the Monks and Nuns, the Presidents and Members of the Parish Councils of the Greek Orthodox Communities, the Distinguished Archons of the Ecumenical Patriarchate, the Day, Afternoon, and Church Schools, the Philoptochos Sisterhoods, the Youth, the Hellenic Organizations, and the entire Greek Orthodox Family in America

On this day of October 28, we give thanks to God and we remember our valiant forbearers for their stand against the forces of tyranny in 1940.   For the people of Greece, their love of freedom after centuries of occupation helped them to recognize the heinous nature of the expansion of the Axis powers and to support heroically the “NO” given in reply by the prime minister when asked to surrender.  In the midst of overwhelming threats of violence and destruction, they also relied on their faith in God and on their affirmation of all that is just and true.

Certainly, the people of Greece knew that the attempt to occupy their beloved land was unjust.  The forces of the totalitarian regimes of the Axis had already taken life, liberty, and property in other countries, and the onslaught of fascism continued.  In response our ancestors sought to defend our homeland, to meet injustice with honor, and to support the response of “NO” with a willingness to sacrifice all for the cause of freedom.  They knew their character, identity, and faith would not allow them to step aside quietly and acquiesce to the demands of tyranny.

The response of the Greeks to the Fascist and Nazi Axis forces and the resistance to occupation was just, for it was a firm and bold recognition of evil.  They knew that ultimately this was a confrontation with powers that sought to strip people of their freedom, their dignity, and even their lives.  This just cause was also motivated by a love of family, of sacred and ancestral lands, and of the blessings of freedom.  Further, the stand of the people of Greece was not characterized by arrogance, disdain, and conceit.  These attributes of the Axis leaders and forces were met by a strong and humble people whose love of God and each other led them to act justly, seeking to uphold what was good and noble and placing their hope and future in the promises of God.

On this day the “NO” of October 28, 1940, and the heroic stand of the people of Greece inspires us and offers a witness to the world of the priority and character of justice in the face of great threats and adversity.  Throughout the world there are many struggles for power as well as movements against tyranny and injustice.  Through our faith in God and in our recognition of our cherished inheritance, we must discern what is just and what is not.  As Orthodox Christians, we are called to live and do justly, to confront the machinations of evil, and to do so in the grace of God with a love for life and for others who are created in His image and likeness.  Our just and holy ways should also be characterized by dignity and humility.  True, decent humility is not a sign of weakness, but of great strength and faith, revealing a deep and abiding trust in the sacredness of the human person and in the power and promises of God.  It is in this way that we will not only honor the legacy of our Greek forbearers, but we will also bring honor and glory to God as we allow His grace to prevail and as we bear witness to the truth of life and salvation in Him.

May His abundant blessings be upon all of our commemorations of this day, and may we continue to offer a bright witness of the sacrificial and just stand made by the people of Greece!

With paternal love in Christ,