Enthronement of the head of the Anglican Church in Canterbury 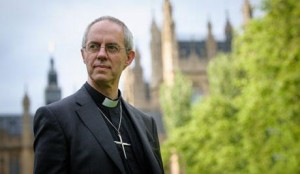 The enthronement of Archbishop Justin Welby took place on March 21, 2013, at Canterbury.

The solemn ceremony was held at the medieval cathedral founded by St. Augustine of Canterbury in 597.

A delegation of the Moscow Patriarchate led by Metropolitan Hilarion of Volokolamsk, head of the Moscow Patriarchate’s department for external church relations, was also present with the blessing of His Holiness Patriarch Kirill of Moscow and All Russia. The delegation included Archbishop Yelisey of Sourozh, Archpriest Dimitry Sizonenko, DECR secretary for inter-Christian relations, and Mr. A. Yershov, assistant to the DECR chairman.

The enthronement was preceded by a long process of consultations which resulted in the announcement made on November 9, 2012, that Bishop Justin Welby of Durham was elected as Archbishop of Canterbury. The next step was made by the College of the Cathedral Canons who approved his election on behalf of the clergy and the diocese. Justin Welby was installed in the office on February 4, 2013, during the solemn ceremony at St. Paul’s in London, and his enthronement to mark the beginning of his ministry took place on March 21, 2013, at Canterbury Cathedral.

In its present form, the rite has been celebrated since 1848. First the archbishop was welcomed at the entrance door of the cathedral. Then he took an oath on the Gospel pledging to preserve the statutes and traditions of the Church of England. After that, the Archdeacon installed him in the Throne of Canterbury and the Dean of Canterbury installed him in the throne of St. Augustine as the new primate of all England and head of the Anglican Communion. After the kiss of peace and the old hymn ‘Be thou praised, O Lord’, the Archbishop of Canterbury Justine Welby delivered his first sermon in Canterbury Cathedral.