Conflicts that originate from collisions of different cultures cannot be solved by means of violence; it is necessary to put things in order on the basis of law, Patriarch of Moscow and All Russia Kirill is sure. 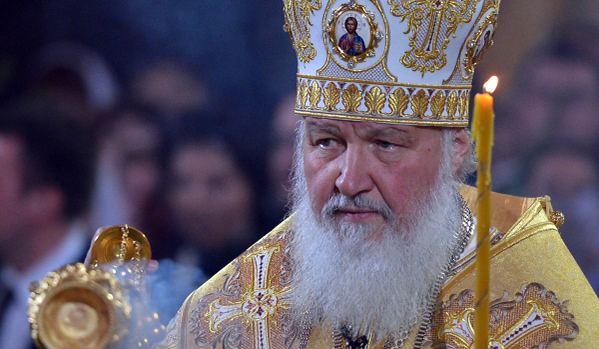 “We know that people, who come to Russia, are not always familiar with our culture and customs, with our faith, and due to many reasons, which I will not speak about now, they do not try to make up their mind to the fact that they live among the majority, which has different views, including on manners, on behavior in the streets, on behavior between men and women. All this, of course, leads to cultural mismatches, to put it mildly,” Patriarch Kirill said in his Christmas interview with the Russia TV channel.

He reminded that Russia had been historically formed as a multiethnic state due to the fact that the Orthodox majority, which had inhabited it, had had “broad toleration” and “had respect” for the customs of followers of other religions. According to the Patriarch, only attempts of converting Orthodox people to different faith caused active resistance. “In those cases it met with a rebuff, to the extent of a physical resistance, military resistance.

But in everyday life there was nothing like this. Everything is different now. And there are other reasons, of course. There are many reasons, which did not exist just yesterday”, the head of the Russian Orthodox Church noted. The Patriarch believes that if these cultural “mismatches” remain “at the level of small everyday tensions, there is hope that all this would eventually come to an end.” However, in case they defy the law and order, then “it is necessary to restore order on the basis of the law”, the head of the Russian Orthodox Church is sure.

“There should be no lawlessness, there should be no violence, there should not be such things as, you know, “let’s leave no stone unturned” and let’s crush everything and instill order with the help of such a disorganized force. It is important that the law works and it is important that we build relationships on the basis of this law until the moment this internal readiness of the people to live peacefully and quietly with each other is revived, despite the existing differences. I see no other way out,” the Patriarch said.

Patriarch of Moscow and All Russia Kirill also takes to heart the disorders in Kiev and believes that the Church can only participate in resolving the crisis through prayers, and not through its presence at the barricades.

“What is happening in Ukraine cuts me to the heart. For me, Ukraine is a home country, my native people, these are my people and my flock”, the Patriarch said in an interview with TV presenter Dmitry Kiselev from the Russia TV channel.

“I pray for Ukraine, I pray for these people. I understand that there is a threat of a split of the nation, a threat of another round of civil confrontation,” the head of the ROC noted.

“A resolution is the liberation of passions” and its main goal is the change of elites, he said.

“And when clergymen appear on the barricades goading the people, it is not a church message,” he said adding that in any circumstances the church should serve peace and unity.The patriarch urged Ukrainians to dialogue that would help resolve existing problems.

Patriarch Kirill on commercialization of Christmas in the West

Ousting of the true meaning of Christmas from the public space, including its substitution by other names, has dangerous consequences, Patriarch of Moscow and All Russia Kirill believes.

“This is a political action, a purposeful ousting of Christian values including Christian-oriented holidays from the life of people. This is a spiritual disarmament of the masses. It is an incredibly dangerous trend”, the Patriarch said. He said that today, the West, concerned by protecting human rights and freedoms, violated the right to openly practice the Christian faith.

The Primate mentioned cases, when, for example, TV presenters or nurses were prohibited from wearing a cross.

“Of course, Christian values in Europe are, certainly, preserved in the life of the people. I have an experience of communication, including with Western Europeans, who keep it all in their hearts. But the general political trend, the overall direction of the elites’ activities is, undoubtedly, anti-Christian and anti-religious in nature”, he stated.