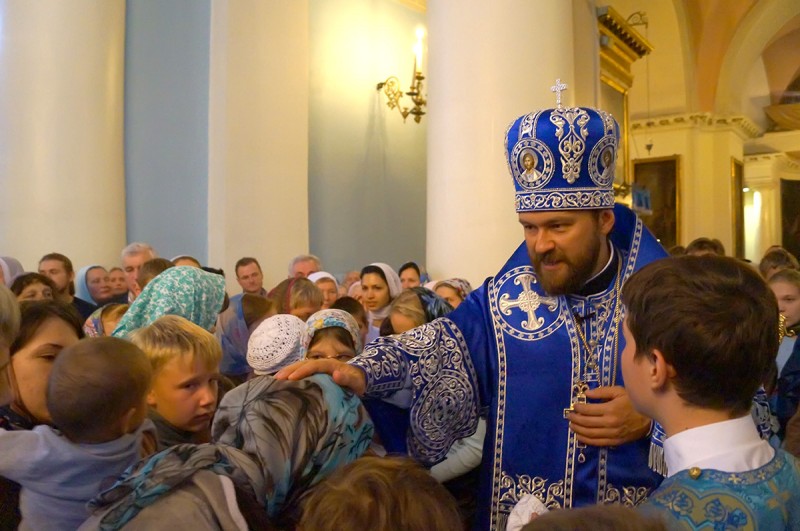 “Europe should follow Russia’s example in adopting laws designed to preserve family life, such as its ban on propagating “homosexual propaganda” to children, a church official said.

“I believe that this law is necessary, and it was adopted in a very timely manner,” Metropolitan Hilarion, the head of the Moscow Patriarchate’s Department for External Church Relations said in an interview with Italian media portal AsiaNews.

“Moreover, I think that the same laws should be brought in other countries, instead of those norms that have been introduced in a number of European Union countries, where same-sex couples are given the right to adopt children,” he added.

Hilarion said Western countries’ polices on the issue were “self-defeating” because same-sex unions lead not only to the destruction of the family but “sign the death warrant of whole nations” in demographic terms.

“There is an acute demographic crisis [in] many European countries under the influence of secular ideologies, advertising, and a consumer-driven attitude to life,” Hilarion said.  “They should take an example from Russia. We want strong families to be revived in Russia, so that our families have many children”.

Russia’s law against gay propaganda among minors came into force at the end of June. The law sets out fines for disseminating information to children on “non-traditional sexual relationships” of 5,000 rubles ($150) for individuals to 1 million rubles ($33,000) for legal entities.

Recent polls in Russia show, however, that a majority of the nation supports the new law, reflecting Russian society’s predominantly conservative attitude toward homosexuality.

Most viewed articles
The Trap of Religiosity113
Patriarch Daniel explains why the Hesychasts were the most sought-after spiritual fathers and what is a prayerful reason103
Bishop Nicholas of Manhattan visits Holy Cross Monastery in West Virginia84
Lord, Save Me!75
Why Everything Is Important (but not the stuff you might imagine)69
25 Years of Help: the Ship-Church Goes On its 25th Voyage to Distant Villages46
Condolences of Patriarch Kirill over the death of believers in the fire that broke out in Abu-Seifein Church in Cairo45
St. Tikhon Church to host Liturgical Music Symposium in October 202241
Ukrainian Church Celebrates Metropolitan Onuphry’s 8th Anniversary of His Enthronement21
Most popular authors
Pravmir.com team237
Vasileios Stoyiannos113
Aurelian Iftimiu103
Fr. Theodore Stylianopoulos75
Archpriest Stephen Freeman69