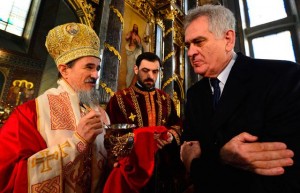 BELGRADE — President Tomislav Nikolić said on Christmas Day that he had wished to spend the holiday “where it is most difficult – in Kosovo”.

However, he noted, the European Union “did not pass that test”.

“The EU must think hard when they are convincing Serbia that they are status-neutral and wish to help us all live better, whether they today showed their real face,” the president said, after attending Orthodox Christmas liturgy in Belgrade’s Cathedral Church of St. Michael the Archangel.

The president added that “this position of the union will be the basis for negotiations”.

“This is in fact ‘to be or not to be’ – whether the president can go to the territory of Kosovo and Metohija, and then, what it is that we are negotiating about in the first place. I did not ask to go on a political, but on a religious mission, but there are no people there who believe in God,” Nikolić told reporters on Monday.

Asked whether he would again ask for permission to travel to Kosovo, he said that he would not ask permission “that he knows nobody will give him”.

The president stressed that he did not expect the ethnic Albanian authorities in Priština to allow him to spend the most joyous Christian holiday with a part of his nation, but that it was the EU that had “failed the test”.

According to him, Serbia cannot get more than was specified in the platform on Kosovo and Metohija, but must not accept anything less either, and announced that the government should state its view of the platform on Tuesday while the Serbian parliament should discuss the resolution on Friday.

“This is what we agreed and I believe that this has to happen,” Nikolić stated, and expressed the expectation that MPs would meet on Friday, and that he would be invited to the session “so that Serbia could finally show to the rest of the world what it wants to do and what it can achieve”

Nikolić called on all relevant sides to approach the platform without scepticism, mistrust or auto censure and added that the document is the best Serbia can achieve at the moment.

“We cannot go above this, obviously, but we must not accept anything less if we want to save Serbia’s honour and dignity and if our citizens who came to the liturgy in the Cathedral Church on Monday did so out of genuine faith,” the president said.

He added that the citizens of Serbia had gone through many difficulties and temptations before now, and that they are used to hardship and sacrifice:

“They (Serbians) need not be reminded how much stronger they can emerge from that. We have always emerged stronger, and I expect that the same will happen this year, because I think that our tires have caught mud all the way down, and it’s time to start pulling out, with everyone’s cooperation.”

Nikolić stressed that the government, above all, was being put to test to show how much those tasked with caring about the people are doing so, rather than worrying solely about themselves and their privileges.

“Better living can be secured in Serbia. I truly wish for this year, where many temptations await – with friends, and those who are less so – to be the turning point. And whichever way it goes, it will never again be as bad as it was. Peace from God, Christ is born,” the president concluded.