Exhibition: “Christian art in Serbia in the period of the Edict of Milan” in Luxemburg 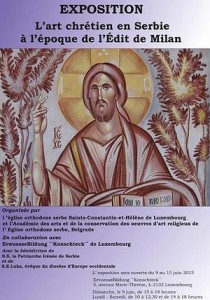 On Saturday, June 8, the exhibition, “Christian art in Serbia in the period of the Edict of Milan” opened in Luxemburg, reports Sedmitza.ru with reference to the French Orthodox website Оrthodoxie.com.

Bishop Luka of Western Europe will head the opening ceremony of the exhibition in the presence of Orthodox clergy, representatives of religious denominations, and civil authorities of Luxemburg. Jean-Claude Larchet will present a report on the holy Emperor Constantine and the Edict of Milan. After that, the exhibition will be presented by its curator, Goran Janicijevic, an iconographer and teacher in the Academy of Restoration and Conservation of the Serbian Orthodox Church. This academy, together with the Theological faculty of the University of Belgrad, has taken part in the preparation of the exhibition.