So, if James 2:24 is the only place in the New Testament where the phrase "faith alone" is actually used and it has the opposite meaning than what is normally given it by, for example, many Protestant, evangelical and nondenominational Christians, where did their understanding of the phrase initially come from and who made it into a slogan? The answer: Martin Luther, the 16th century Reformer.
admin | 14 July 2009 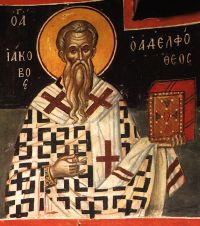 The only place in the New Testament where the phrase “faith alone” is actually used is in the Letter of James 2:24, where the Scriptures say precisely the opposite: “that a person is justified by works and not by faith alone.” The entire context of that passage is given below, translated from the original Greek:

14What good is it, my brothers, if a man claims to have faith but has no works? Can such faith save him? 15Suppose a brother or sister is without clothes and daily food. 16If one of you says to him, “Go in peace; keep warm and well fed,” but gives him nothing for his physical needs, what good is it? 17In the same way, faith by itself, if it is not accompanied by works, is dead.

18But someone will say, “You have faith; I have works.” Show me your faith without works, and I will show you my faith by my works.

20You foolish man, do you want evidence that faith without works is useless? 21Was not our father Abraham considered righteous for his works when he offered his son Isaac on the altar? 22You see that his faith and his works were working together, and his faith was made complete by his works. 23And the scripture was fulfilled that says, “Abraham believed God, and it was credited to him as righteousness,” and he was called God’s friend. 24You see that a person is justified by his works and not by faith alone.

25In the same way, was not even Rahab the prostitute considered righteous for what she did when she gave lodging to the spies and sent them off in a different direction? 26As the body without the spirit is dead, so faith without works is dead.

So, if James 2:24 is the only place in the New Testament where the phrase “faith alone” is actually used and it has the opposite meaning than what is normally given it by, for example, many Protestant, evangelical and nondenominational Christians, where did their understanding of the phrase initially come from and who made it into a slogan? The answer: Martin Luther, the 16th century Reformer.

Martin Luther, in his German translation of the Bible – a translation that had as powerful an impact on the German language as the King James Version had on English – inserted the word “alone” (allein in German) in Romans 3:28 making the text read: 28For we maintain that a man is justified by faith (alone) apart from works of the law.

Roman Catholic scholars of the 16th century knew this word was not in the original Greek text of Romans 3:28 and took Martin Luther to task for this intentional mistranslation. Father Georges Florovsky, a patristics scholar and well-known Orthodox theologian of the last century who taught at Harvard and Princeton and was the dean of St. Vladimir’s Seminary in the 1950’s, wrote the following about this Reformation controversy: “Luther even added the word “alone”—allein—in Romans 3:28 before “through faith” precisely to counter the words in James 2:24: “You see that a man is justified by works and not by faith alone.” What is more is that Luther became very aggressive and arrogant in his response to the criticism that he had added “alone” to the Biblical text. “If your papist makes much useless fuss about the word sola, allein, tell him at once: Doctor Martin Luther will have it so and says: Papist and donkey are one thing; sic volo, sic jubeo, sit pro ratione voluntas. For we do not want to be pupils and followers of the Papists, but their masters and judges.” Luther continues in a bantering manner in an attempt to imitate St. Paul in the latter’s response to his opponents in the Corinthian correspondence (2 Corinthians 11:22-23): “Are they doctors? So am I. Are they learned? So am I. Are they preachers? So am I. Are they theologians? So am I. Are they philosophers? So am I. Are they writers of books? So am I. And I shall further boast: I can expound Psalms and Prophets; which they cannot. I can translate; which they cannot . . . Therefore the word allein shall remain in my New Testament, and though all pope-donkeys should get furious and foolish, they shall not get the word out.” In some German editions the word “allein” was printed in larger type!” 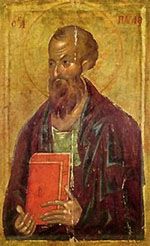 St. Paul, in discussing the basis for our judgment by God on the last day, says in Romans 2:6 that “God will give to each person according to his works.” The passage in its context is given below:

6God “will give to each person according to his works.” 7To those who by persistence in good works seek glory, honor and immortality, he will give eternal life. 8But for those who are self-seeking and who reject the truth and follow evil, there will be wrath and anger. 9There will be trouble and distress for every human being who does evil: first for the Jew, then for the Gentile; 10but glory, honor and peace for everyone who works for the good: first for the Jew, then for the Gentile. 11For God does not show favoritism.

Interestingly enough, in both the Letter of James 2:14-26 and at Romans 2:6-11, the New International Version, a translation done by evangelical Protestant scholars in the 1970’s and the most popular translation of the Bible in the United States today, does not consistently translate the Greek word erga as “works,” as I’ve done above. More often than not, the word is translated as “deeds” or by the phrase “by what he has done.” In effect, this ideological bias in translation downplays the close connection between faith and works drawn by both the apostles James and Paul.

Do Orthodox Christians believe that we’re saved by grace through faith? Yes, of course we do! St. Paul says so in his Letter to the Ephesians 2:4, 8-9. But we do not separate faith and works. Notice that even here, where St. Paul says that we are “saved by grace,” he goes on to say that “we are God’s workmanship, created in Christ Jesus to do good works.” As is so often the case, we need to read the rest of the passage.

4But because of his great love for us, God, who is rich in mercy, 5made us alive with Christ even when we were dead in transgressions—it is by grace you have been saved. 8For it is by grace you have been saved, through faith—and this not from yourselves, it is the gift of God— 9not by works, so that no one can boast. 10For we are God’s workmanship, created in Christ Jesus to do good works, which God prepared in advance for us to do.

Orthodox Christians understand the word “works” in this passage to refer to “the works of the Law” of the Old Testament as St. Paul says below in Galatians 2:16 as found in the NIV translation:

Father Ted Stylianopoulos, the long-time professor of New Testament at Holy Cross, our seminary in Boston, commenting on Galatians writes:

“St. Paul’s whole point here is that the Galatian Christians had begun to practice Jewish customs like circumcision – not that they were overly ethical, something which St. Paul requires as intrinsic to the Christian life (Galatians 5:16-6:10). Overall, in his letters, St. Paul seems to distinguish three kinds of works:

Thus, Paul’s contrast between faith and works fundamentally concerns faith in Christ and specifically what he calls “works of the Law,” namely the ritual law of the Old Testament, not the moral commandments of the Old Testament which remain valid and are fulfilled by Christ. Still, salvation is indeed “by grace…through faith” in Christ and it is a “gift of God”. Faith in Christ and good works are integrated, not contrasted – much less opposed to one another – by St. Paul who everywhere exhorts and demands moral and ethical obedience to God as a necessary component of the Gospel. Paul teaches not only justification by faith but also judgment by the criterion of good works.”