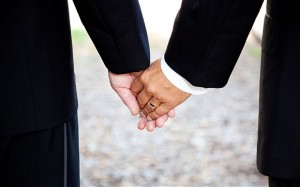 An unprecedented alliance of religious leaders has called on David Cameron to rethink his plans to allow gay people to marry, warning that the change will “devalue the meaning of marriage”.

Christian, Jewish, Muslim, Hindu and Buddhist leaders have signed a letter to the Prime Minister, pleading with him to abandon the legislation, which will be debated in the House of Lords next week.

Allowing couples of the same sex to marry will cause “injustice and unfairness”, the signatories said, accusing Mr Cameron of rushing the legislation through Parliament to prevent proper scrutiny.

The letter was signed by leaders of several Christian denominations, including Bishop Michael Hill, the Anglican Bishop of Bristol and Archbishop Bernard Longley, the Roman Catholic Archbishop of Birmingham.

Among the leading Muslims signing the letter is Sir Iqbal Sacranie, a former head of the Muslim Council of Britain.

Other signatories include: Rabbi Natan Levy, an adviser to the Board of Deputies of British Jews; Bhai Sahib Bhai Mohinder Singh, a Sikh community leader; and John Beard, a prominent Buddhist.

The proposed law would “create a two-tier form of marriage”, they wrote.

In same-sex marriages, “the importance of consummation, procreation and the welfare of children, as well as issues such as adultery have been ignored.” That, the signatories said, “devalues the meaning of marriage itself”.

Mr Cameron has argued that allowing gay people to marry will address a fundamental injustice and strengthen society.

The proposals have already split the Conservative Party, as half of its MPs opposed the legislation in the Commons last month.

The bill is expected to face stiff resistance from members of the House of Lords next week and could even be rejected there. That would raise the prospect of a constitutional struggle between ministers in the Commons and the upper house.

In a personal appeal to the Prime Minister, the signatories warned that his plans will actually weaken society.

“Marriage between a man and a woman is the fundamental building block of human society,” they said. “These proposals would radically undermine the nature and place of the family in our society. We cannot believe that this is what you intend and therefore ask you to pause before taking such a damaging step.”

A total of 53 religious leaders have signed the letter, which notes that concern about the proposals is not confined to any single faith.

Followers of all faiths and those without any religion are unhappy about the proposals, they said.

“We are disappointed that the Government has failed to engage in meaningful debate with the many different faith communities in Britain. It has wrongly assumed that opposition to the redefinition of marriage is confined to a small number of Christians.”

The House of Commons has spent several days debating the details of the proposals, but the religious leaders said ministers are rushing the process.

“The haste with which this legislation is being driven through Parliament and the failure to talk to all religions will mean that the problems which we have repeatedly highlighted will be written into law with serious and harmful consequences for the health of society, family life, and human rights such as freedom of religion and of speech.”