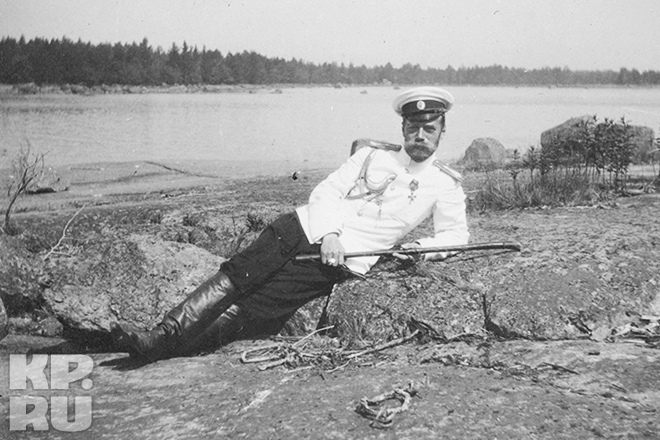 Held a virtual prisoner by the Bolsheviks months before his execution, Russia’s last tsar Nicholas II pasted informal snapshots of his family into an album which has now come to light in a Russian provincial museum.

The photographs, most of which have never been seen before, show the last of the Romanov rulers of Russia without pomp and in unguarded moments. Many were taken by Nicholas II himself.

Since the 1920s, the album has been held in the Urals in the local history museum of Zlatoust, a small city in western Russia dominated by foundries.

It is now on show at a museum in Yekaterinburg, formerly Sverdlovsk, where the family was brutishly murdered along with their servants in 1918 in a crime that still raises raw emotions in Russia.

The exhibition marks the 400th anniversary of the founding of the Romanov dynasty.

Without any gold crests or monograms, the album has simple pages with the photographs posted thematically rather than in chronological order. On the back of the pictures are pencilled names.

The exhibition has caused excitement in Russia with national daily Komsomlskaya Pravda serialising the photographs. The album has never previously been shown outside the museum where it is held.

“We don’t know for sure how the album turned up in our museum, but it has been in our holdings since the end of the 1920s. Where it came from though is not recorded,” the deputy head of the history department of the Zlatoust museum, Yury Okuntsov, told Agence France Presse by telephone.

“Most likely before that it was in the possession of someone who had something to do with guarding or executing the tsar’s family.”

Zlatoust is around 300 kilometres (186 miles) from Yekaterinburg, where the tsar and his family were shot in a cellar.

The album contains just one photograph taken after the tsar’s abdication in 1917.

The others date from 1914, 1915 and 1916 and it seems likely that the tsar compiled the album to pass the time while in exile with his family in Tobolsk in western Siberia between 1917 and 1918.

Nicholas II and his family initially lived in a degree of comfort in a mansion in Tobolsk. But following the Bolshevik revolution in October 1917, conditions worsened and they were held as virtual prisoners.

They were then transferred to Yekaterinburg in late April 1918 ahead of their execution.

“It’s possible that the tsar compiled this album after he arrived in exile” in Tobolsk, Okuntsov said.

“It seems likely that in 1916 he would not have time for this: he was almost constantly at the general headquarters of the armed forces. But then he found himself with nothing to do and got to work on the album in Tobolsk, this is possible.”

Okuntsov said he first came across the album in the museum’s archives in the 1980s when it would have been unthinkable to exhibit the photographs.

Since the 1990s, with the wave of interest in the tsar’s family, he said he had followed publications but only seen a handful of the photographs replicated elsewhere. When Tsar Nicholas’s diaries were published, he used them to pinpoint the chronology and locations.

“Altogether there are 210 photographs, in good condition. Only one was taken in 1917, where the Duchesses have closely cropped hair” after suffering from illness, said Okuntsov.

The daughters Tatyana and Olga have shaven heads in the photograph taken at Tsarskoye Selo with their father and brother.

These are not formal, technically perfect photographs but appear to have been taken by the tsar and his family, who were keen amateur photographers and who look open and relaxed in front of the camera.

In one, Nicholas II jokingly gives his youngest daughter Anastasia a puff on his cigarette holder.

In another, his son Alexei, clad in a stripy bathing suit, stands in a hole on a river bank as Nicholas II wields a spade in a shabby army uniform.

The most exotic photograph shows Nicholas II and Alexei with an elephant which was taken out of the royal family’s private zoo to swim in a pond during a heatwave — an incident recorded in Nicholas II’s diary.

Pravmir: See an article (in Russian) with some of the photographs mentioned here.