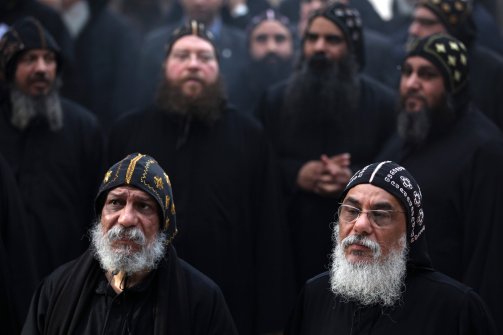 Clergymen gather to wait for the arrival of Egypt’s Coptic Christian Pope Tawadros II, at the historic al-Muharraq Monastery, a centuries-old site some 180 miles (300 kilometers) south of Cairo in the province of Assiut, Egypt, on Feb. 5, 2013. (Khalil Hamra/AP)

Coptic Christians and other minorities in Egypt are feeling voiceless under the country’s new Islamist government. In fact, the problem is region-wide, reports Vivian Salama.

Since the popular uprising of 2011, Botrous Samy, a medical doctor in Cairo, has struggled with a new, rather daunting dilemma: “One morning, I woke up and realized that at age 38, I had no real political views,” he said. “Suddenly, I felt lost.”

His political aspirations long stifled by decades of autocratic rule, Samy, a Coptic Christian, voiced dissent like many of his fellow Christians – through the scope of religion. “It is a fact, Copts have not been given the same opportunities and often had to work harder to achieve the same goals as a Muslim colleague, so this dominated our rhetoric,” he recalled. “When the revolution happened, I realized so many Muslims shared our concerns and our battles. If we keep talking about the revolution as ‘Christian this’ and ‘Muslim that’ then we have failed.”

Recent sectarian clashes in Egypt highlighted growing fears across the region that as the winds of change bring Islamist groups to the forefront of government, the future for Christians is growing dim. With new political parties hitting the playing field, many Christian groups worry that they will increasingly find it difficult to assert themselves as a serious political force.

“There has historically been a perceived problem of Copts– or religious minorities in the Middle East or elsewhere for that matter–in participatory democratic politics,” said Mina Khalil, a visiting assistant professor of Islamic and comparative law at the American University in Cairo. “While some Copts do eschew the thought of a ‘Coptic’ or ‘minority’ party in the name of universality of Egyptian citizenship, others may not be against it–in fact, may welcome it–as a way to guarantee their specific interests in a predominantly Muslim state.”

An attack on the Coptic Cathedral in Cairo sparked violent clashes earlier this month, prompting rights groups and Christian activists to blame Islamist President Mohamed Morsi for failing to take serious action to protect the minority group. At least four people – Christian and Muslim—were killed and 90 wounded in the cathedral clashes, seat of the Coptic pope. The incident sparked an exchange of accusations between the government and the papacy. Government officials accused Copts of orchestrating the clashes, while Pope Tawadros II blamed Morsi for failing to keep a promise to protect Christians.

Activists are seeking to boost political participation among Christians. However, the fear among many is that violence and turmoil will increasingly prompt those Christians in Egypt and elsewhere to emigrant if they have the means, weakening the group as a political constituency.

According to Father Michael Sorial, spokesman for the Coptic Archdiocese of North America, there was a noticeable spike in the number of Copts registering at churches across the United States in the six-month period following the fall of Mubarak. “Egypt is in a state of chaos and people are scared — and I’m not just talking about Christians. Moderate Muslims – women, children. You name it,” Sorial said.

Egypt is home to the largest number of Christians across the Middle East, with anywhere from 8 to 9 million Copts living there today. With very few exceptions, they have traditionally struggled to win political representation in the highest positions, often earning seats in parliament, not through ballots, but by appointment from the president. Since the Muslim Brotherhood rose to power last year, many Christians joined opposition groups in political boycotts, most recently shunning the Islamist-dominated committee tasked with hastily drafting a controversial take on the Egyptian constitution.

“The current government views Copts not as equal citizens but rather as an interest group that needs to be placated,” Paul Sedra, an Egypt expert and associate professor of history at Simon Fraser University, said. “Mubarak likely viewed Copts in the same way – but at least the rhetoric of citizenship remained in place, and that rhetoric was important insofar as it put a brake on the escalation of sectarian rhetoric. Now the brakes are off, and this could mean a fundamental shift in the culture of the country.”

Across the region, there are now no more than 12 million Arabic-speaking Christians left, according to various estimates, and this could drop to as low as 6 million by 2025. Countries are being transformed: in 1956, Lebanese Christians made up 54 percent of the country; today they’re about 30 percent. Iraq’s Christian population has fallen from 1.4 million in 1987 to 500,000 today. And Bethlehem, the birthplace of Jesus, was 80 percent Christian when the State of Israel was founded in 1948; now it’s 25 percent.

In Libya this month, militants reportedly set fire to Benghazi’s Coptic church; the priest was inside and narrowly escaped death. The Coptic Orthodox church in Tripoli is heavily guarded, and the Greek Orthodox church has closed.

In Syria, where Christians make up a larger minority and have played a significant role in politics long before it was engulfed by civil war, many are fearful that an alternative to Bashar Al Assad will come at a great expense. Assad and his father have, over the years, sought to earn the loyalty of many Christians through fears of a Sunni Muslim takeover.

The changes are worrisome. This week, armed gunmen ambushed a car carrying two bishops as they drove from the Turkish border to the besieged Syrian city of Aleppo. The two clergymen, from the Syriac Orthodox and Greek Orthodox Churches, were reportedly en route to a humanitarian mission on Monday when the unknown men attacked, taking them hostage. They were released unharmed, but the incident prompted many to fear the worst amid reports of the rising power of extremist groups inside Syria.

“Syria is not going to be as one as it used to be,” said Ayman Abdel Nour, a prominent Syrian dissident and former political prisoner who is also a Christian. “We have 110 brigades operating in Syria. Each one has its own command. No one knows who is kidnapping, who is asking for ransom, who is the target. It is dangerous for everyone. Christians, Druze, Muslims, no one is safe.”

Most viewed articles
Metropolitan Hilarion of Eastern America and New York to Be Buried in Jordanville on May 22162
Patriarch Kirill: The Peoples of Russia and Ukraine Have No Interest in the Conflict158
Communion restored between the Serbian Orthodox Church and the Macedonian Orthodox Church – Ohrid Archbishopric118
Metropolitan Hilarion of Eastern America and New York Reposes in the Lord117
What Do We Celebrate at Mid-Pentecost?100
Metropolitan Onuphry: One Needs to Search for the Truth in Spiritual Life, not Easy Ways93
Celebrating 100 Years with Paschal Joy62
Patriarch of Serbia to Concelebrate with Archbishop Stephen of Ohrid38
Family Life and Spiritual Warfare17
Most popular authors
Pravmir.com team685
Ioannis Foundoulis100
Priest Luke A. Veronis62
Archpriest Michael Gillis17
Maria Trushanina1