Fire breaks out in Jerusalem’s Valley of the Cross 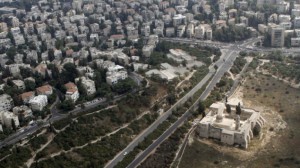 A fire broke out Tuesday afternoon in Jerusalem’s Valley of the Cross, home to an 11th-century Greek Orthodox monastery.

It took an hour to get the fire under control, but not before it reached the walls of the monastery and the edge of Hayim Hazaz Boulevard, a major thoroughfare in the capital.

Nine fire crews were on the scene, Jerusalem Fire Department spokesman Captain Asaf Abras told The Times of Israel. The monastery was evacuated as a precaution and nearby streets were blocked off.

Twenty five dunams of vegetation were burned, and there was minor external damage to the monastery walls. The Israel Museum, which overlooks the valley, was never in danger.

The fire department is looking into the possibility of arson, according to Abras.

In December 2012, in an act apparently perpetrated by Jewish extremists, Hebrew graffiti was sprayed on a wall of the Monastery of the Cross and three cars in the parking lot had their tires slashed.

It was the second time in a year that the monastery had been targeted by “price tag” activists. The graffiti was cleaned up by Jerusalem municipality workers.

According to tradition, the tree from which the True Cross was made, on which Jesus was crucified, grew in the valley.

Source: The Times of Israel