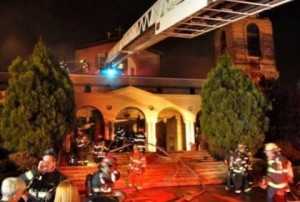 The faithful at St. Demetrios Church in Merrick N.Y. didn’t let a fire there two nights before keep them from holding services outside on Sunday. Aug. 11 as officials checked the damage inside. Parts of the church will need very extensive repairs.

MERRICK, N.Y. – Fire officials are investigating a fire that caused heavy damage to St. Demetrios Greek Orthodox Church at 2421 Hewlett Ave. Flames could be seen shooting through the roof of the church the night of Aug. 9. Firefighters helped worshipers carry items out of the church building, trying to salvage what they could. There were no reports of any injuries. According the Nassau County Police, the fire started around 9:25 p.m. from a lit candle inside the church. The altar area inside church suffered smoke and water damage, however, the total damage to the church is unknown at this time. The Nassau County Fire Marshal went to the scene.Several firefighters suffered from smoke and heat exhaustion. Nassau County Police said that one Merrick fireman was transported to a local hospital and treated for carbon monoxide poisoning.