Source: Greek Reporter
Ioanna Zikakou | 16 December 2015
On Sunday, December 6, His Eminence Cleopas Strongylis Metropolitan of Sweden and All Scandinavia attended the Holy Liturgy at the Monastery of St. Nicholas in the city of Rättvik, Sweden. A memorial was also held for the monastery’s founder, the late Eusebius Vitti, as well as an inauguration ceremony with the participation of the Holy Diocese clergy and the local Church members. 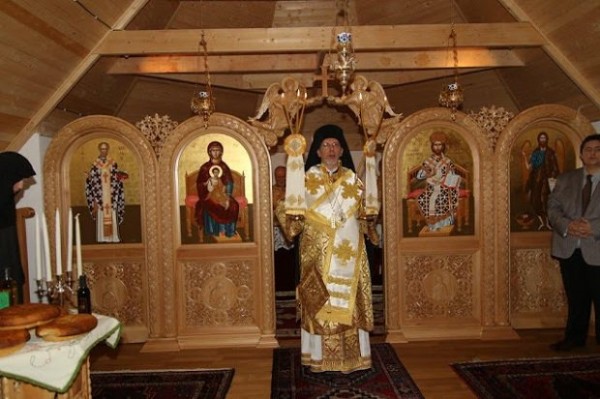 The Metropolitan read out a congratulatory message from Ecumenical Patriarch Bartholomew and expressed his gratitude to all the people who contributed in any way to the festivities.

The liturgies were also attended by the Greek Ambassador to Sweden Dimitrios Touloupas, who congratulated the Metropolitan on the renovation of the monastery. The municipality of Rättvik was represented by Märta Kallur, who offered the Metropolitan her study on the cultural traditions of Rättvik.

The Monastery was founded by Eusebius Vitti in 1973. After Vitti’s final journey to Greece in 1980 and his death in 2010, the task of maintaining the monastery was undertaken by the Orthodox Brotherhood “Agios Nikolaos.” The monastery was completely destroyed by a fire in October 2010. Over the next years, a new building was constructed, which remained uninhabited until October 2014, when the Metropolis of Sweden undertook the task of completing its thorough renovation. This hermitage is the first Greek Orthodox monastery in Sweden and all Scandinavia.