Being baptized into Christ means putting Him on and living our lives according to His teachings and His example. If we have truly done so, then the same rejection and cries of ridicule await us as those that greeted His coming. When we look at the lives of the saints from this perspective, we can see, even in the most dignified of hierarchs and noblest of martyrs, the clear and unmistakable signs of Foolishness for Christ's sake
Peter Drobac | 19 November 2008

In the Orthodox Church, we generally classify saints into categories, based on the roles they assumed in life that led them on their paths of salvation to the gates of  Paradise. We often hear of the holy martyrs who “fought the good fight and received their crowns of glory” for their witness  to the Faith in the face of persecution; the holy ascetics are praised for the self-denial that brought them closer to our Saviour; the radiant hierarchs that grace the Church with their teachings and pastoral guidance are honored with hymns of praise; the glorious Apostles and virgins and confessors and prophets are commemorated every day in recognition of their union with God and their glorification of Him.

But there remains one group of saints that, at a casual glance, seems to stick out from the brave and noble figures mentioned above, and contradicts the characteristics that we would consider praiseworthy in many of them. These holy people received a calling from God, just as powerful as any calling to the priesthood or to martyrdom: to live a life of abject poverty and homelessness, to suffer ridicule and abuse, and to instruct those with a modicum of spiritual insight by their sometimes absurd actions. 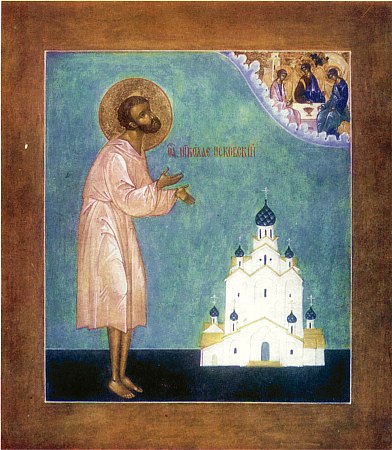 St Nicholas Salos, for instance, taunted the Tsar Ivan the Terrible to eat a piece of raw meat during Lent (the tyrant refused to break his fast out of false piety), accusing his hideous actions towards his subjects equivalent to consuming human flesh.  St Isaaky the Recluse, and many others like him, took on the yoke of feigned  madness and stupidity. Countless others suffered spiteful accusations and gross injustice in complete silence, desiring to be shamed and mocked by the world with all their being, instead of defending themselves. In many cases, their holiness was only made manifest to those around them after their repose. They remain one of the least understood group of saints and, especially to us in the 20th century, the most troublesome. And if we are to be saved, we must, to some degree, emulate them.

These Fools for Christ’s sake embody what the Orthodox consider to be a cornerstone of Christ’s teaching – the abandonment of the wisdom of this world. They took upon themselves the same suffering and humiliation that Christ underwent for our sakes, since both they and He were rejected by the world in favor of earthly things. When the Jews claimed that they had “no king but Caesar” and that Christ should be killed, they demonstrated their profound abandonment of the Lord as their King. They sided with the wisdom of the world, which told them that it was expedient that One should die so that the Jewish nation should remain.

Christ was a scandalous figure for the Jews. He claimed to be the Messiah, but the Jews were expecting their Messiah to release them from the bonds of their political enemies, not their spiritual ones. Christ preached about the Kingdom of God, about the rewards that awaited those who did the will of His Father, rather than earthly rewards. His crucifixion was the ultimate act of willing self-abasement, a most profound example of fulfilling God’s will in direct opposition to the desires and expectations of those opposed to Him. And so, the world rejected Him and His Gospel because they did not conform to its expectations based on fallen perceptions and ideals.

Being baptized into Christ means putting Him on and living our lives according to His teachings and His example. If we have truly done so, then the same rejection and cries of ridicule await us as those that greeted His coming. When we look at the lives of the saints from this perspective, we can see, even in the most dignified of hierarchs and noblest of martyrs, the clear and unmistakable signs of Foolishness for Christ’s sake. First by the pagan authorities, then by the apostates and heretics, and finally by the “faithful” themselves (even to this day!), those that remained as unyielding witnesses to the Truth faced punishment, exile and death. Rather than yield to God’s infinite wisdom and mercy, His creation rejected those that bore them since they were incompatible with their goals.

But Fools for Christ went even further. They took upon themselves the difficult yoke of obedience to God’s will in the absence of active persecution and presented the world, not obstinate centers of resistance, but spiritual barbs and jabs to reveal the extent to which it had deliberately strayed from God. Much like the Old Testament Prophets, who stood apart from society and spoke the word of God to His people so that they should faithfully return to Him, they could not both be a part of the world and at the same time its chastisers. In fact, the Prophets, who were the  voices of God and did His will, were remarkably foolish in the eyes of their contemporaries – the Word of God they brought was rejected, and their actions, intended to convey in a physical way His word, were misunderstood, so that they were persecuted and killed by those they had intended to save.

And the Fools for Christ – who is it that railed against them and persecuted them for their rejection of the world? It was those whose minds had not been turned towards God, who had not yet accepted Him as King, and who had not accepted the rule and reign of His Kingdom in their hearts. It was those without spiritual discernment capable of distinguishing between things of this world and those of God. It was those who took pride and comfort in their imagined spiritual fruitfulness, but which were blind to the lives of these holy people, whose actions were in fact gifts from God to restore their persecutors’ sight.

Brothers and sisters, let us be careful that we do not become like these, because living blindly in the world as we do, the temptation to scoff and condemn the works of God is ever-present. We must become the weak and foolish vessels of God that confound the strong and wise of the world. This, by no stretch of the imagination, means that we are required to take the burdens that the Fools for Christ took upon themselves, but rather, that we should look to them for reassurance. If the world rejects us in small ways for our small movements towards God, we can take comfort in the knowledge that they were once rejected for their great works – and before them, Christ. Let us be vigilant, so that we do not mistake the absurdity of this world’s teachings for wisdom, and ignore the wisdom of God’s word because we are told it is foolish, because it is the only road to eternal life.