For 47 Years He Lived in Exploits of Asceticism, Silence, and Seclusion 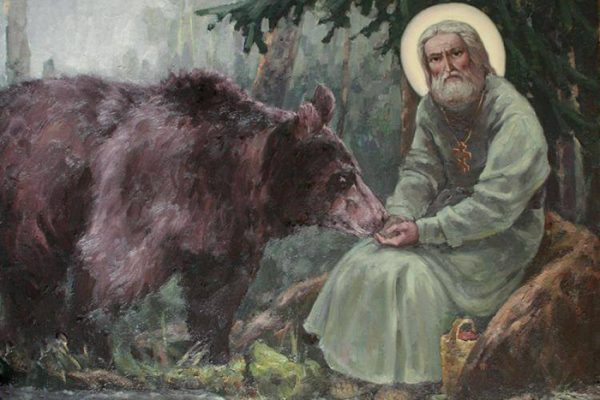 This is how Metropolitan Anthony of Sourozh described the exploits of Saint Seraphim of Sarov: “Saint Seraphim lost everything willingly; he abandoned his home, renounced his kin and tribe, and went to the monastery with nothing but God and prayer. There he committed himself to obedience; he accepted everything that the Lord would send him, and everything that men would want to put on his shoulders, carefully and humbly, for the sake of God. He crushed his willfulness; he committed himself through the people unto God’s will until the end; and he went into the forest, into the wilderness, so that nothing might separate him from God, but also so that nothing might serve him as an artificial prop, so that grace alone might strengthen his weakness, and faithfulness alone might serve him as a foothold.”

Here is a selection of essential spiritual aphorisms of this outstanding 19th-century saint:

He who wishes to be saved must always have a heart for repentance, according to the Psalmist: The sacrifices of God are a broken spirit: a broken and a contrite heart, O God, thou wilt not despise (Psalm 51:17).

Repentance begins with the fear of God and attentiveness, as the Holy Martyr Boniface says: The fear of God is the father of attention, and attention is the mother of inner peace, which gives birth to the conscience, which enables the soul to see its unsightly appearance, as if in some pure and calm water, and thus gives rise to the roots and sprouts of repentance.

Is it possible for a believer who has received God’s grace to rise up after the fall? Yes, it is, according to the Psalmist: Thou hast thrust sore at me that I might fall: but the Lord helped me (Psalm 118:13). When the Prophet Nathan rebuked David for his sin, he immediately repented and was forgiven.

The unclean spirit only has a strong influence on those who are ridden with passions, whereas those who are cleansed of passions are attacked only from the outside.

Is it possible for a man in his early years not to be perturbed and excited by carnal thoughts? It might seem impossible but he must pray to the Lord God that the spark of vicious passions may be extinguished at the outset. Then the flame of passion will not increase…

He who conquers passions also conquers sorrow. He who is defeated by passions will not escape the shackles of sorrow. As a sick person is seen by the color of his face, so the one who is filled with passion is clearly depressed.

If a person endures an illness with patience and gratitude, it will count as an ascetic feat or even more.

You can’t place a seal on cold and stale wax. Likewise, a soul not tried by labor and infirmities cannot receive the seal of divine virtue.

We should attribute any success in anything to the Lord and say with the Prophet, Not unto us, O Lord, not unto us, but unto thy name give glory (Psalm 115:1).

You should not open your heart to others needlessly; there is one out of a thousand that will keep your secret.

You must be gentle with your neighbors, and take heed not to hurt them even slightly.

Most viewed articles
What Does Asceticism Look Like?164
Be Bearers of Light100
Orthodox Chapel to Be Constructed in Campina das Missoes75
Metropolitan Mark of Ryazan Explains Why People Sometimes Don’t Know What to Repent of72
Report: 5.2 Billion People Face ‘Very Severe Violations of Religious Freedom’70
Ukrainian Church Calls for De-Escalation of the Conflict in Donbass63
Archbishop of Australia Attends Commemorative Events for Battle of Crete in Melbourne57
The Meekness of God46
Priest Killed for Serving in Romanian to be Honoured with Bust in Albania15
Most popular authors
Pravmir.com team335
Archpriest Michael Gillis163
Metropolitan George (Khodr) of Mount Lebanon100
Archpriest Stephen Freeman46
Aurelian Iftimiu13
Maria Trushanina1