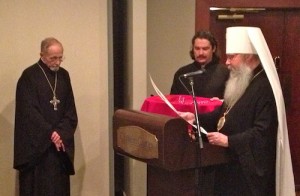 Protopresbyter Thomas Hopko, Dean Emeritus of Saint Vladimir’s Seminary, Yonkers, NY, was presented with the rarely awarded Saint Innocent Award, Gold Class, by His Beatitude, Metropolitan TIkhon on behalf of the Holy Synod of Bishops and the Orthodox Church in America.

The award, which was presented on August 24, 2013—the 50th anniversary of Father Thomas’ ordination to the priesthood by His Eminence, the late Archbishop [later Metropolitan] Ireney—was given in recognition of Father Thomas’ outstanding service as a priest, teacher, seminary dean and writer who has had a deep influence for good on the life of the Orthodox Church in America.  It was presented at the closing banquet of the Archdiocese of Canada’s Assembly, titled “Faithful Stewardship: Our Words, Commitments and Actions,” in the presence of His Grace, Bishop Irénée of Quebec City.

n his remarks, Metropolitan Tikhon emphasized that the award was as much for who Father Thomas is as for his accomplishments.  Likewise, he acknowledged Matushka Anne Hopko for the support she has given Father Thomas over the years.  (The couple celebrated their 50th wedding anniversary on June 9 of this year.)

Archpriest John Jillions, OCA Chancellor, was the main banquet speaker and offered a testimonial on Father Thomas’ life, work and influence in the Orthodox Church, as well as the influence he has exerted on thousands of people.  He noted that Father Thomas is the author of eight books and dozens of articles and has been featured in numerous videos, audiocassettes. 400 lectures and podcasts on Ancient Faith Radio.  In particular, Father John cited Father Thomas’ “‘55 Maxims for Christian Life,” which is widely available on line.

Father John also noted the Ancient Faith Radio podcast interview of the Hopkos by Archpriests Alexander Garklavs and John Shimchick, marking the couple’s 50th wedding anniversary.  When asked what advice they would give to people today—especially clergy couples—who are serving the church, Matushka Anne in that interview said, “Do the best you can in the place you find yourself,” to which Father Thomas added, “Concentrate on that small group of people you are responsible for, and just be a good Christian.”

In accepting the award, Father Thomas expressed deep gratitude for the love and kindness shown to him.  He said the words from the Psalms, quoted by Saint Innocent when he was dying, summed up his own feelings about his own life: “The steps of a man are from the Lord, and he establishes him in whose way he delights; though he fall, he shall not be cast headlong, for the Lord is the stay of his hand” (Psalm 37:23-24).

For decades, Father Thomas and his family have spent summers in Canada at the community in Labelle where he serves Saint Sergius Chapel.

A photo gallery of the event may be viewed athttp://www.archdiocese.ca/.