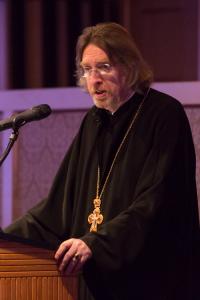 The 31st Annual Father Alexander Schmemann Memorial Lecture, titled “On ‘The Mystical Theology of the Eastern Church’” will be presented by Archpriest Dr. John McGuckin, a leading international commentator on Eastern Orthodox theology and early Christian history.  The free public lecture on Friday, January 31, 2014 will be preceded by an academic convocation at 7:00 p.m., at which Father John will be awarded a Doctor of Divinity degree honoris causa.

Father John is Professor of Byzantine Christian Studies at Columbia University, and Union Theological Seminary’s Ane Marie and Bent Emil Nielsen Professor in Late Antique and Byzantine Christian History, an endowed Chair created in 2008 out of one of the oldest Church History departments in America. Father John has authored 23 books and has served as visiting professor and guest lecturer in many universities and colleges in England, Ireland, Greece, Romania, Ukraine, Russia, Italy, and the US.  On November 7, 2013, he was a featured guest speaker at the seminary’s 75th Anniversary gala banquet.

A public reception will follow the lecture, which will be held in the Metropolitan Philip Auditorium of the John G. Rangos Family Building. The lecture will also be made available as a “Voices from St. Vladimir’s Seminary” podcast on Ancient Faith Radio.