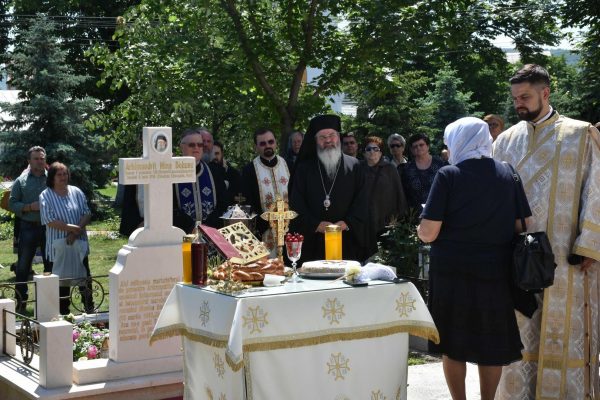 Photography courtesy of the Diocese of Huşi

Bishop Ignatie of Huși remembered Archimandrite Mina Dobzeu as ‘a brave confessor of Christ in hostile times,’ during a memorial service last Saturday marking two years since the repose of the priest who baptised Fr Nicolae Steinhardt during communism.

“After reading Father Mina’s Securitate file – which we intend to publish in full so that the face of a confessor and a brave soul can be seen more clearly and brightly – I concluded that one of the most long-lived virtues of Father Mina was courage,” bishop Ignatie said June 6.

“Assuming this courage coincided exactly with the period of his earthly existence. Ninety-seven years of courage, especially during the period when the “red devil” – communism wanted to snatch faith from people’s souls.”

‘When you have the opportunity to read this file from the Securitate, you will agree with me and see what a brave man Father Mina was. He stayed that way until the end.’

The memorial service took place following the Divine Liturgy at Fr Mina’s tomb in the courtyard of the episcopal cathedral of Husi.

The hierarch reminded those present that Archim. Mina Dobzeu “was the baptiser of the great man of culture, Father Nicolae Steinhardt from Rohia.”

The Diocese of Husi announced the publishing of a commemorative volume and a documentary film dedicated to Archimandrite Mina Dobzeu’s 100th birthday anniversary that will be marked next year.

“We want to edit a volume containing archival documents and the security file of Father Mina, and we are working on a video documentary about the Father’s life and confession, made by Trinitas TV, to keep alive his presence and power of confession.”

Archimandrite Mina Dobzeu, confessor of the faith during the communist period, reposed in the Lord on June 7, 2018.

At the Agape Vespers on the day of Holy Pascha, Patriarch Daniel noted that the Gospel shows us…

An exhibition entitled “Portraits, icons and books for the soul: Moldovans in Ukraine, Ukrainians in Moldavia. Sacred art…