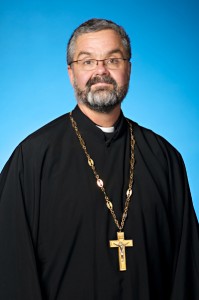 Archpriest Dr. Steven Voytovich, a licensed professional counselor who spent many years in the field of pastoral care and education, has been named Dean of Saint Tikhon’s Orthodox Theological Seminary here effective August 18, 2013.

Father Steven succeeds Archpriest Dr.  Alexander Atty, who retired due to health after serving as Dean for the past three years.

Father Steven brings to this position years of experience as a parish priest, educator, presenter at seminars and retreats, contributing writer for various religious publications,  and frequent presenter at Orthodox Church in America events.

His Grace, Bishop Michael, Ph.D., Seminary Rector and Bishop of the Diocese of New York and New Jersey, stated, “I am well pleased that Father Steven will be joining Saint Tikhon’s Seminary as our Dean. His pastoral, leadership, academic and work related credentials are superb, and we look forward to Father Steven moving Saint Tikhon’s to new heights. On behalf of the board of trustees, faculty, staff and students, we welcome him and offer our prayers for his new ministry.”

In 2007, Father Steven represented the OCA and was plenary presenter at the Ninth International Congress for Pastoral care and Counseling in Krzyzowa, Poland.  He served as communications and public relations officer from 2004 to 2007. He also represented the OCA at International Congresses held in Accra, Ghana in 1999, and Bangalore, India in 2004.

Father Steven serves as Director of the OCA’s Department of Institutional Chaplaincies, for which he cocreated and coordinated the OCA Seminarian Internship Program.  The Department supports Orthodox Christian men and women serving in institutional chaplaincy roles. From April 2010 until joining Saint Tikhon’s Seminary, he worked as director of Clinical Pastoral Education at Episcopal Health Services, Long Island, NY.  During that time, he was attached to Holy Trinity Church, New Britain, CT, as a supply priest for the Connecticut Deanery, but continued serving in multiple capacities within the OCA.

Father Steven was ordained to the diaconate by His Beatitude, Metropolitan Theodosius in 1991 and to the priesthood by His Grace, Bishop Job, then of the Diocese of New England. Over the years, he has served as pastor of Three Saints Church, Ansonia, CT; Holy Virgin Mary Church, Waterbury, CT; and Saint Alexis Church, Clinton, CT.

Father Steven has earned three advanced degrees from Saint Vladimir’s Orthodox Theological Seminary, Yonkers, NY, including a Doctor of Ministry degree in 1999.  His thesis was titled “Orthodoxy and CPE:  Education for Ministry Beyond the Liturgical Setting.”  He has two masters degrees from Saint Vladimir’s Seminary, including a Master of Divinity degree with Commendation for Thesis, which he received in 1990. His thesis topic was “The Ministry of Those Who Suffer.”  In 1991, he earned a Master of Arts degree in Liturgical Music and served as choir director of the seminary octet.  He also holds a Master of Arts degree in Community Counseling from Fairfield University, Fairfield, CT, which he received in 2005, and a Bachelor of Science degree in Business Administration from the University of Minnesota, which he earned in 1986.

Of his appointment as Dean of St. Tikhon’s Seminary, Father Steven said, “In accepting this position I look forward to supporting Saint Tikhon’s mission of providing quality theological education, including personal, spiritual, and pastoral formation to those whom God has called to serve His vineyard.”

In related news, on the occasion of the 75th anniversaries of Saint Tikhon’s and Saint Vladimir’s Seminaries, the first ever joint committee meeting of the Boards of Trustees of both seminaries took place in Cleveland July 18.  The objective was to identify and discuss the future challenges facing theological education and ways of promoting stronger ties between the two schools.

Committee members, including hosts Michael Herzak, Chairman of the Saint Tikhon’s Board, and Alex Machaskee, Chairman of the Saint Vladimir’s Board, agreed to convene similar meetings in the future in order to maintain open communication and explore possible collaborative opportunities that will benefit both seminaries. Among the topics a sub-committee will consider include faculty and student exchanges and other avenues for cooperation.

The joint meeting had been authorized by both Boards of Trustees in the spirit of Orthodox Christian unity.