From a Homily on the 8th Sunday after Pentecost

Only one thing is needful: the Kingdom of God. Christ the Wonder-worker strove to direct the eyes of all men to this one point. He who so looks has one thought -- God; one feeling -- love; one yearning -- to draw near to God. Blessed is he who has come to this integrity; such a man has become like a glass lens that concentrates the sun's rays in order to produce fire.
| 10 August 2008 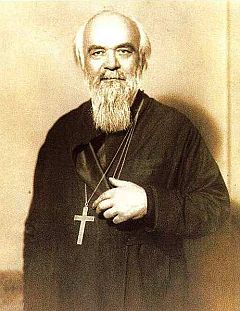 All that the Most High does, He does as is fitting. There is nothing in what He does that is aimless, unnecessary or superfluous. Why do some people wander about so aimlessly and do so many aimless things? Because they are unaware of the purpose of their lives and the goal of their journeying. Why do some people load themselves down with unnecessary cares, being scarcely able to move under the great heap of superfluous things? Because they do not know the one thing that is needful.

In order to bring together man’s fragmented mind, to heal man’s divided heart and to unite man’s disordered strength — in order to do all this, the Lord Jesus, from first to last, revealed one goal, and one only: the Kingdom of God. A cross-eyed man looking two ways at once sees neither way. Oh, how aimless is the life of a man striving after many ends! How insensitive is a divided heart! How weak is the will if its strength is frittered away!

Only one thing is needful: the Kingdom of God. Christ the Wonder-worker strove to direct the eyes of all men to this one point. He who so looks has one thought — God; one feeling — love; one yearning — to draw near to God. Blessed is he who has come to this integrity; such a man has become like a glass lens that concentrates the sun’s rays in order to produce fire.

The words that the Lord said to Martha: “Martha, Martha, thou art careful and troubled about many things, but one thing is needful” (Luke 10:41-2) were, in fact, said as a reprimand and a warning to the whole of mankind. And this one thing needful is the Kingdom of God (cf. Matthew 6:33). All that the Lord said and did was done with this aim in view. To this point was gathered all the flame that lights travelers as they wander around the chasms and whirlpools of this transitory life.

All that the Lord does is fitting; all is done with this highest, this sole and unique, aim; all is fitting and absolutely necessary both in the words spoken and the deeds accomplished. Never a superfluous word; never an inappropriate deed. And how fruitful were His words and deeds! How many millions of times has the fruit of every word and deed of His borne fruit, right down to our own times! And how sweet, fragrant and life-giving is that fruit!

Why did the Lord not turn stones to bread when Satan sought this of Him? On two later occasions, when the multitude around Him was hungry, He turned a little bread into a vast amount, so that there was even more left over than there was at the beginning of the meal. The first miracle, however (the turning of stones to bread), would have been inappropriate, unnecessary and superfluous, while the second (the multiplying of bread) was appropriate, necessary and fitting.

Why would the Lord give no sign from heaven to the Pharisees when they demanded this of Him? Did He not give such signs from heaven on innumerable occasions: unheard-of miracles on the sick, on lepers, the mad, the fearful and the dead? Because every sign from heaven to the envious and vain Pharisees would have been inappropriate, unnecessary and superfluous, while in the other cases it was appropriate, necessary and fitting.

Why did the Lord not move mountains from one place to another, or cast them into the sea? He could have done so: there is no doubt of that; so why did He not do so? He who was able to command the stormy sea to be calm, and the winds to be still, could undoubtedly have moved mountains and cast them into the sea. But what purpose would have been served? None whatever. And the Lord therefore did not do this. There was, though, a great need for the sea to be calmed and the wind to be stilled, for men were drowning and crying out for help.

Only devils and sinners demand aimless, unnecessary and superfluous miracles of Christ. Just look at what senseless things Satan demanded of the Lord: to turn stones into bread in the wilderness and to leap down from the pinnacle of the Temple! And see how the hardened sinners, the Pharisees and scribes, who had witnessed many of Christ’s miracles that were of service to men, sought some further sign of Him, some aimless and superfluous miracle like casting a mountain into the sea! The Lord therefore refused these demands by the devil and the sinners. But He never refused to perform miracles when they would be appropriate and of service for the salvation of men.