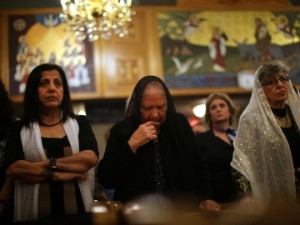 Increasingly under pressure in Egypt, the Copts, one of the world’s oldest Christian communities, are starting to migrate to Georgia, a bastion of Orthodox Christianity in the South Caucasus. But the transition is not entirely a smooth one.

In Egypt, violent clashes between Copts and Muslims have been on the rise since the 2011 ouster of former President Hosni Mubarak, with many Christians reportedly preferring to leave than experience continuing harassment and discrimination. Earlier this month, the US Commission on International Religious Freedom announced that Egypt “is failing to meet international religious-freedom standards.”

Copts, who classify themselves as an Orthodox Christian denomination, say that Georgia’s strong Orthodox Christian heritage – Eastern Christianity took root here in the 4th century – motivated them to make the move. The country’s relative proximity (Tbilisi is roughly a two-and-a-half-hour flight from Cairo) and reputation for relatively lax business and visa regulations also played a role.

Around 2,500 Coptic Egyptians currently live in Georgia, according to the Ministry of Justice’s Public Service Development Agency, which manages residence data. Most arrived this year and live in the Georgian capital, Tbilisi; a few hundred have settled a few hours’ drive to the west in the parliamentary seat of Kutaisi.

The focal point for the Coptic community has become a Catholic church in downtown Tbilisi that allows the Copts to use its sanctuary. Each Wednesday morning, hundreds gather for a two-and-a-half-hour mass, rich with the smell of incense, the sound of cymbals and the haunting melody of songs in Coptic and Arabic.

“We came here because in Egypt there were a lot of commercials saying ‘Welcome [to] Georgia,’” explained Samir, a young father of two, who moved to Tbilisi from Alexandria four months ago. “As it is also an Orthodox country, we thought it was the right decision to move here.”

Many more Coptic Egyptians may opt for Georgia in the near future, predicted Father Johan, a priest from Egypt’s Saint Anthony Monastery who came to Georgia in May. Land has been purchased on the outskirts of Tbilisi for a Coptic Orthodox Church, he added.

But not everything has proven to be easy.

First, there are matters spiritual. While the Copts consider themselves to be an Orthodox denomination, the leaders of the Georgian Orthodox Church do not. Theological differences separate the two, explained Father Iakob Tchitchilidze, a professor at the Georgian Orthodox Church’s Spiritual Academy. “That’s why they can’t even pray in our churches,” he elaborated, adding that the Church has “nothing against” the Copts themselves.

No doubt aware of that point of view, the Copts nevertheless want Georgian Patriarch Ilia II to bless their intended church building, according to Father Johan. As yet, the issue has not been decided. The Georgian Orthodox Church generally has not extended such blessings to other Christian denominations; in 2011, it initially strongly opposed allowing religious minorities to be registered as legal organizations.

Father Johan, though, projected that the head of the Coptic Orthodox Church, Pope Tawadros II, could pay a visit to Tbilisi to discuss the opening of a Coptic church with the patriarch.

But even if common ground can be found on doctrinal issues, there are secular matters also causing friction. Justice Minister Tea Tsulukiani has announced that the government plans to review Georgia’s liberal visa regime. While country quotas do not exist, “we are already more inclined to deny visas to people from some countries,” said Levan Samadashvili, chairperson of the Public Service Development Agency. The Ministry of Internal Affairs, which is giving a security advisory for each long-term visa demand, “has set the standards’ bar higher,” he said.

So far in 2013, Georgia had granted over 1,740 visas to Egyptian citizens, more than a seven-fold increase over the 222 visas given to Egyptians during all of 2012. Some 280 permanent residence permits so far also have been given out; 740 Egyptians already had one.

Denials also are noticeable; 290 visa and 300 residence-permit requests have been rejected so far this year. Samir, who operates a small restaurant in Tbilisi, says that he and his family are among those recently denied one-year visas. “Why? I don’t know,” he complained. “They said ‘Welcome in Georgia,’ and now they don’t renew our visas. … They are playing with our lives.”

Kyrillo, a young businessman from Alexandria who runs a household-goods store in the shabby-chic Tbilisi neighborhood of Sololaki, says the same. “So, I’m already searching on [the] Internet [for] another country where we could go,” he said. “Moreover, business doesn’t work here. People are poor.”

Many Copts come to Georgia just for a few weeks, to figure out how to open a business and to see if they can bring their family here.

Many are traders, who complain about the size of the Georgian market. At roughly 4.6 million people, Georgia is not much bigger than Egypt’s second largest city of Alexandria. Annual per capita incomes in Georgia and Egypt, however, are similar — $5,900 compared with $6,600, according to the Central Intelligence Agency World Factbook.

While those Copts interviewed by EurasiaNet.org say that they appreciate the ease with which businesses can be set up in Georgia and the lack of corruption, most claim that they hardly make any money.

“A lot are losing their savings here, so they have to go back to Egypt,” commented one young man from Cairo who has opened a car-rental company in Tbilisi.

But others are willing to wait on Georgia despite the difficulties. “I see that there are a lot of problems for us here, but, still, this is a Christian country and I hope we’ll always be welcome,” said Samuel, who runs a telecom business in the Alexandria region.