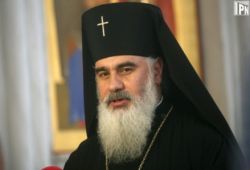 Metropolitan Serafim of Borjomi and Bakuriani

Metropolitan of Borjomi and Bakuriani Serafim has given high marks to the meeting between Georgian clergymen and Abkhaz leader Alexander Ankvab held in Sochi on March 29.

Metropolitan Serafim told reporters on Monday “this is the first time the representative of the Georgian Church has met with the head of the de facto Republic of Abkhazia in the past twenty years.”

Metropolitan Serafim said among the meeting participants was Metropolitan Hilarion of Volokolamsk, the chairman of the Synodal Department for External Church Relations.

Ankvab reiterated that the people of Abkhazia have chosen independence and the Abkhaz Church is also seeking independence.

Metropolitan Serafim said he could not say whether such meetings will be possible in the future. However, he said the meeting participants had agreed that such meetings are needed.