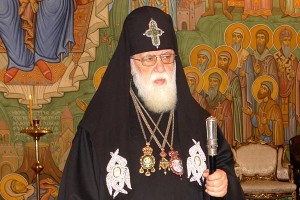 Patriarch of the Georgian Orthodox Church, Ilia II, has called on the Georgian authorities in his Easter epistle for adopting anti-abortion law, saying that it would contribute to resolving country’s “grave demographic situation.”

“Abortion is a heinous murder of an innocent creature committed with a decision and intent of parents. A doctor is a direct accomplice to this crime as well. This merciless murder of infants still continues unhindered and there is no one to protect them – neither the sate nor the society,” the Georgian Patriarch said.

“Those who do not want to give birth to a child for economic reasons… please do not commit this terrible sin; if you cannot afford raising children, the Church will take care of them.”

“Today, when there is so grave demographic situation, we think that the state must adopt relevant laws to ban abortion (of course exceptions should also be taken into consideration),” reads the Georgian Church leader’s Easter epistle.

Commenting on the issue, PM Ivanishvili said on May 5, that the Patriarch was right while pointing out at Georgia’s “demographic problems”; he, however, indicated that focus should be made on economic development in general in order to tackle this problem.

“Only this issue [anti-abortion law] cannot solve this problem. In order [to tackle] the demographic problem it first and foremost needs economic development… there are other issues as well, but I think that the major factor is revenue for the families,” Ivanishvili said.

GD lawmaker, Dimitri Khundadze, who chairs parliamentary committee for healthcare and social issues, said that he was against of an “outright ban” of abortion, but in favor of banning sex-selective abortions.

“This is an issue which requires cautions approach. I think that selective abortion should be banned, which takes 30% share of all abortions in Georgia,” MP Khundadze said on May 6.

“But I think that an outright ban of abortion is inadmissible, because it may lead to an increase in unregistered abortions and an increase in newborn mortality rate,” he said adding that his committee was planning to invite experts to work on the issue.

In October, 2011 the Parliamentary Assembly of Council of Europe (PACE) adopted a non-binding resolution condemning the practice of prenatal sex selection.

The resolution calls on Council of Europe member states to “introduce legislation with a view to prohibiting sex selection in the context of assisted reproduction technologies and legal abortion, except when it is justified to avoid a serious hereditary disease.”

The resolution calls on Georgia in particular to study causes and reasons behind “skewed sex ratios” at birth and to ensure the collection of “reliable data” on sex ratios at birth; it also calls on the Georgian authorities to step up efforts to raise the status of women in society and ensure effective implementation of laws and policies on gender equality and non-discrimination.