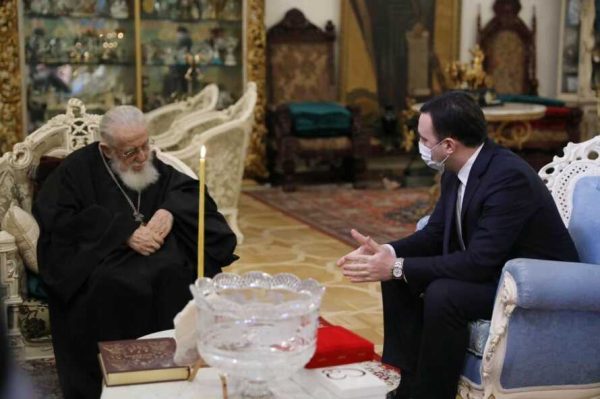 Georgia’s Prime Minister Irakli Garibashvili expressed his admiration for the Catholicos-Patriarch Ilia II and disapproved of the slanders brought in the public space against the Georgian Orthodox Church.

The Prime Minister of Georgia met on Tuesday, March 2, with His Beatitude Patriarch Ilia at the Patriarchate’s headquarters in Tbilisi a week after being appointed to the government’s leadership.

Irakli Garibashvili said that meeting the Patriarch is always “a tremendous joy” and “a great honour.”

Expressing his full support for the Church, the Georgian government’s head referred to the “unprecedented attack against the Church and Patriarch himself.” “A cascade of unprecedented slander was heard and seen, which is of course absolutely unacceptable, anti-state and hostile, not serving the interests of our country and Church.”

“Today I once again expressed our great respect, tremendous modesty and admiration to our Patriarch, the entire Church and Patriarchate,” Garibashvili said. CNN declared Patriarch Ilia in 2010 “Georgia’s most trusted man.” In November 2013, he obtained the highest degree of confidence in a National Democratic Institute for International Affairs survey.

However, in recent years, especially in the online environment, various defamations and misinformation have appeared about the Georgian Orthodox Church.

In one of his Christmas messages, Patriarch Ilia drew attention to the risk posed by the freedom of speech, especially on social platforms, in the form of hate speech, disinformation and defamation.

“Freedom of speech is one of the most important rights of the public, which allows any citizen to express his/her opinion publicly through mass media and social networks that create a sense of personal freedom and create an opportunity to share one’s own opinion with others, but, unfortunately, some people often change the reality and abuse the freedom of speech”, reads the epistle.

“Today, people do not avoid insulting and humiliating others; falsehoods and foul words have become a common occurrence.”

“The gravest form of the lie – conscious lies have become widespread, the slander, which sometimes is masterly obvoluted in the name of truth, which the listeners will initially mislead.”

“Those who commit it, probably think that they do not physically assault and hurt others. It is a big mistake. The word has an unusual force, both positive and negative. The word can give someone life or be the same as death. Moreover, none of our words disappears, and it will be our incriminating circumstances before God.”

About 83-86% of Georgia’s population is Orthodox.

Photography courtesy of the Patriarchate of Georgia