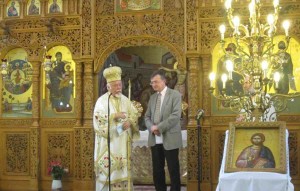 The Minister of Foreign Affairs Kyriakos Gerontopoulos, responsible for the issues of Greeks abroad, met on July 18 at the Ministry of Foreign Affairs with the Metropolitan Archbishop Athenagoras (Aneste) of Mexico, who said he’s been urging his flock to support their homeland.

During the meeting they discussed issues concerning the Holy Metropolis of Mexico, under the jurisdiction of which, are the countries of Central America and the Caribbean.

After the meeting with Gerontopoulos, the Metropolitan Athenagoras stated: “I had the great honor to be accepted by the Deputy Minister responsible for the religious issues abroad and to present him the work we do in the countries belonging to our Metropolis.”

He added: “I also informed him about the actions in order to put my people at the disposal of our homeland during those difficult times. There are half million faithful in our Metropolis, who are Philhellenes, who love the culture, the language and the civilization of Greece and support its efforts in order to overcome this difficult period.”