Getting Married at the Bottom of the World: Trinity Church in Antarctica 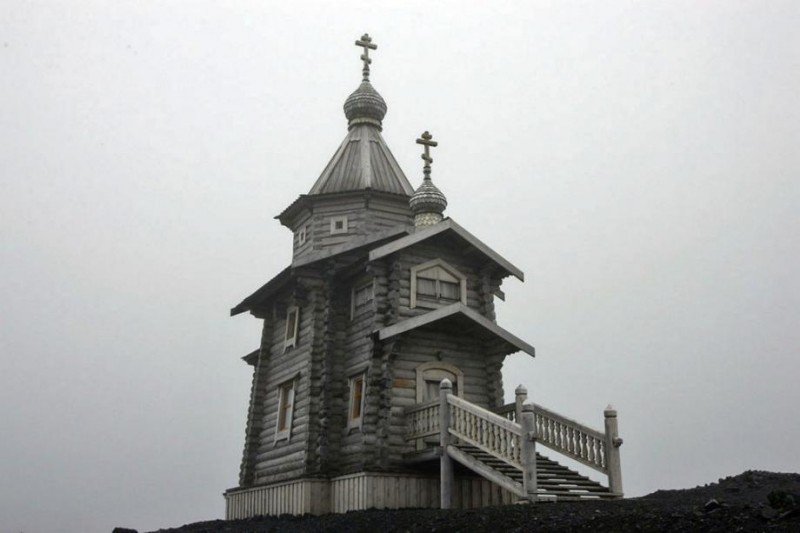 Atlas Obscura on Slate is a new travel blog.

From the scorching deserts of Sinai to the frozen tundras of Siberia, Orthodox Christianity has a history of building its churches and monasteries in inhospitable places. But only a few can rival Trinity Church on King George Island. The southernmost Orthodox church in the world, Trinity was built near Bellingshausen Station, Russia’s permanent outpost in Antarctica.

In the mid-1990s Patriarch Alexius II of Moscow gave his blessing for this audacious project. The church was constructed in Russia and transported by a supply ship to its present location. One or two monks from Troitse-Sergiyeva Lavra — considered the most important Russian monastery as it is the spiritual center of the Russian Orthodox Church — volunteer to man the church year-round.

While most of buildings on this continent are built to hug the ground in order to reduce their exposure to the polar wind, this church proudly stands 50 feet tall. It is a wooden structure built from Siberian pine and carved in the traditional Russian style by master carpenters of Altay.

The priests manning the church take care of the spiritual needs of the staff of nearby Russian, Chilean, Polish, and Korean research stations. Their obligations include praying for the souls of 64 Russians who lost their lives in various expeditions, and the very occasional, very chilly, baptism.

While the church is large enough to accommodate 30 visitors, it is rarely filled to capacity. In 2007, however, the church performed its first wedding — the first wedding ever celebrated in a church in Antarctica — between Chilean and Russian researchers.

Mission on the White Continent: an Interview with Hieromonk Pavel (Gelyastanov)

Most viewed articles
Seven Lessons for the New Year from St. Seraphim of Sarov208
The Perfectionist113
New Jersey Governor Signs Bill Legalizing Abortion Up To Moment of Birth91
The Way of Christ Is The Way of Love57
140th anniversary of repose of St Antipas the Athonite of Calapodești celebrated in Roman56
Metropolitan Hilarion Celebrates the 20th Anniversary of His Episcopal Consecration53
A Great Time to Join the Orthodox Church20
1
Sunday of the Samaritan Woman1
How We Worship: the Struggle of the American Experience1
Most popular authors
Priest Luke A. Veronis208
Protopresbyter Themistoklis Mourtzanos113
Ryan Foley91
Fr. Theodore Stylianopoulos57
Aurelian Iftimiu56
Pravmir.com team53
Frederica Matthewes-Green20