Gifts of the Magi relic from Mount Athos to visit Russia, Belarus and Ukraine

Moscow, December 13, Interfax – The holy relic of the Gifts of the Magi, preserved in the Monastery of St. Paul on Mount Athos, will be taken to Moscow, St. Petersburg, Minsk and Kiev for the Orthodox Christmas holiday in January 2014. 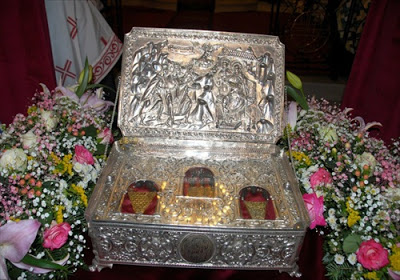 The relic will be on display at the Cathedral of the Christ the Savior in Moscow from January 7 to January 13, in St. Petersburg’s Resurrection Novodevichy Monastery on January 14-17, in the House of Mercy in Minsk, the capital of Belarus, from January 18 to January 24, and in the Monastery of the Caves in the Ukrainian capital, Kiev, from January 25 to January 30, the Moscow Patriarchate’s press service said on Friday.

It is one of the few holy relics associated with the life of Jesus Christ that have survived in the world. It will visit Russia, Ukraine and Belarus with the blessing of Patriarch Kirill of Moscow and All Russia.

The legend says that the three Magi (Wise Men) visited Jesus after his birth, bearing him gifts of gold, frankincense and myrrh.