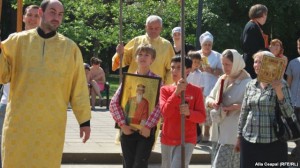 Orthodox believers protest against a march organized by Moldova’s lesbian, gay, bisexual, and transgender community in May.

It is a little like the proverbial unstoppable force running up against an immovable object.

Moldova’s reformist, pro-EU ruling coalition is increasingly running up against the country’s powerful, conservative Orthodox Church as it approaches the coveted goal of initialing an Association Agreement with the European Union in Vilnius in November.

Integration with the European Union is the top priority of Prime Minister Iurie Leanca’s government. But it is a goal that the church resists, in large part because of an EU-backed tolerance law that bars discrimination on the basis of, among other things, sexual orientation.

That law was passed in May 2012 over the protests of conservatives led by the Orthodox Church and the opposition Communist Party, but the resistance has not abated.

In fact, with the church threatening to excommunicate officials who back the law, and the members of the ruling coalition raising the specter of tax audits on clergy, both sides now appear to be taking the gloves off.

On June 20, Orthodox leaders released a statement saying that it will call for national protests if the protection for sexual minorities is not rescinded. The statement also called for a law against the “immoral propaganda” of “nontraditional” lifestyles: “homosexual, lesbian, transsexual, bisexual, pedophilic, zoophilic, incestuous, and perverse behavior.”

The church also said if the law is not reversed, it would bar officials from participating in the rite of communion and might excommunicate them. It warned of the necessity of protecting believers from the “spread of spiritual death in our society.”

‘An Accomplice In Sin’

Father Ghenadie Valuta, a priest who has led antigay protests in recent months, called government officials “pagans” on June 25 and said the church cannot compromise on this issue.

​​”These verses from the Bible clearly show that our government is being punished and warned by God through his holy Bible,” Valuta said. “The church only expresses God’s will. If it failed to convey this message, the church would become a meaningless institution — or, worse, an accomplice in the sin of homosexuality, a failed institution that does not speak the truth and is not on God’s side.”

​​In response, deputy parliament speaker Adrian Candu of the reformist Moldovan Democratic Party, a member of the ruling coalition, said the government might initiate a probe into the “undeclared revenues” of Orthodox clergy and strip the church of some of the many tax exemptions and privileges it currently enjoys.

Candu condemned the church for inciting the public against gays and for threatening government officials.

“Our priests drive the most expensive cars, have the most expensive phones, the most luxurious houses — sometimes more than one house,” Brega says. “Not all of them, but the majority of priests and even monks. They are constantly online on their laptops. They have satellite dishes and blogs where they recruit people or listen to confessions online. All this, and they pay zero taxes.”
Brega thinks it is unfair that struggling nongovernmental organizations in Moldova — the poorest country in Europe — pay taxes while the church does not.

Lawmaker Veaceslav Ionita, of the Liberal-Democratic Party and chairman of parliament’s Finance and Budget Commission, warns against an open confrontation with the church.

​​”I would advise everyone against letting emotions overcome reason and ask them to think about the role of the church in our society,” Ionita says. “We are coming out of a totalitarian system that destroyed the church, and even though that was 20 years ago, we still haven’t figured out what its role should be.”

He adds that the government has laws and mechanisms to prosecute “all suspects of illicit enrichment” and there is no need to take special measures directed at the church.