Does God Answer Our Prayers? – On the Nineteenth Sunday after Pentecost

Source: Holy Trinity Greek Orthodox Church
He leaned over to me and asked, “How come so many people pray?” I looked at him with a question mark all over my face. He continued, “Everyone knows that God does not answer our prayers.”
Priest Nick Milas | 19 October 2014 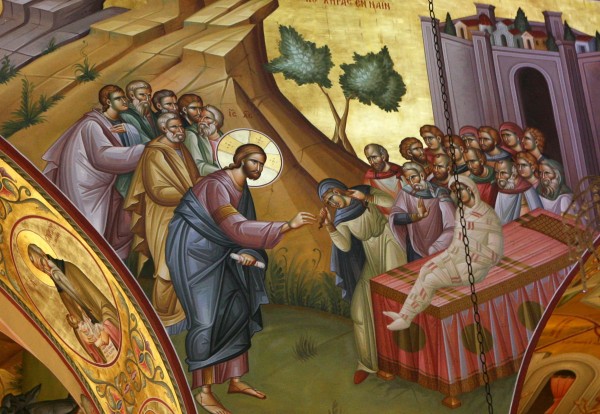 At that time Jesus went to a city called Na’in, and His disciples and great crowd went with Him. As He drew near to the gate of the city, behold, a man who had died was being carried out, the only son of his mother, and she was a widow; and a large crowd from the city was with her. And when the Lord saw her, He had compassion on her and said to her, “Do not weep.” And came and touched the bier, and the bearers stood still. And He said, “Young man, I say to you, arise.” And the dead man sat up, and began to speak. And He gave him to his mother. Fear seized them all; and they glorified God, saying, “ A great prophet has arisen among us!” and “God has visited His people.”

In my role, as Director of the Teacher Mentor Program for the School District, I was asked to observe the instructional practices in an 8th grade algebra class. I was told in advance, that the teacher was also having a difficult time controlling some of the students. I was invited to make some suggestions to help him improve his classroom management skills.

A few days before I was scheduled to visit the school, the principal called and asked to speak with me before the observation. That conversation took longer than I expected, and consequently, I was late for the beginning of the class. I entered quietly, trying to settle in unobtrusively. I tried not to interrupt the instruction, but the teacher stopped his lesson, greeted me warmly and introduced me to the class.

I went to the back of the room and sat an empty student desk. The youngster sitting next to me kept looking at me, trying to catch my eye, interested in starting a conversation. Of course, it was a very bad time for us to start talking, but he was very persistent.

He finally caught my eye and asked: “Are you a real Father, like you know…?” – and he made the sign of the cross.

I laughed and whispered. “Yes,” I answered. “ A real father.”

He wasted no time and pulled his desk right next to mine. “I have so many questions to ask you.” I suggested that he wait until class was over and I would be happy to chat with him.

During a lull in the instruction, he leaned over to me and asked, “How come so many people pray?” I looked at him with a question mark all over my face. He continued, “Everyone knows that God does not answer our prayers.”

With that, he had me hooked. I whispered to him, “I believe that God does answer prayers.”

“No,” he said.” I have a friend, who’s a Jehovah’s Witness and he has shown me that there are many mistakes in the Bible.”

Once again, I was faced with the reality that we are often bombarded with wrong messages and are exposed to so much information that is not correct.

I can’t say for sure, why this child believes that God does not answer prayers. It could be an issue related to adolescence. It could be some incidents in his life that have led him to believe that he is alone to fight his battles all by himself. Maybe all that was just a ploy to get my attention. But it didn’t seem to be the latter.

There are no doubt many situations that would cause this fourteen year old to feel alone, but there should be many other times that he does not.

As we know, people become despondent, when they think that they are completely alone or feel isolated and abandoned. By contrast, it has been observed by physicians and therapists that people of Faith, survive serious hardships, often overcoming many obstacles and even beat the odds.

I suspect that this boy’s friend had an ulterior motive in discussing the Bible with him, but I would have enjoyed getting know more about the eighth grader and how his friend’s distorted view of Scripture reinforced some of his own beliefs.

Our choppy conversation was not limited to just this.

He did ask me, if it is true that Adam named all the animals. I answered, “Not to my recollection.”

Perhaps it is natural, that when we become aware of all the misery that exists in the world, that we get the impression that God does not listen to prayers.

There even appears to be a secular and popular notion in American culture that religious rules are contrary to the Bible and even contrary to God’s will. But that is not true. The Gospel, the Good News, came out of the Church and changed the way people of faith understood God and pursued salvation.

I wish I could have told that boy about St. Luke’s Gospel. I think that the story of the widow of Nain would have been important for him to hear. I doubt his friend will discuss that passage with him.

The widow of Nain, herself, like the algebra student, may have come to believe that God does not listen to our prayers.

We can safely assume that she had prayed to God to keep her children safe and healthy. But it seems that did not happen.

She can expect that she prayed to God to help her husband survive. But sadly, he died.

And we can only expect, that with the desperate tears of a mother, she implored
God to restore her son’s health, but that did not happen either.

When Jesus saw her in the funeral procession, His heart was broken. Her pain became His pain. Her suffering became His suffering. Her misery became His misery. So He did what God does so many times. He turned desperation into hope.

He did not tell her how sorry He was for her loss. He did not commiserate with all the mourners who were there. He did not even pray over the dead man’s body.

He looked at the funeral bier with the wrapped body on it and He said: “ Young man, I say to you, arise.” And the dead man sat up, and began to speak. St. Luke says, and Jesus, “gave him to his mother.”

Not all our prayers are answered in such a dramatic way. Sometimes they are answered quietly and without anyone noticing. Very often I have to point out to people that a miracle has occurred to them or for them. Expressions like spontaneous, natural, and remission are often used to minimize the impact that the Lord has had on our lives. Most people want to see the Red Sea part and let us through, in order to accept that miraculous events really do occur. But, people of Faith understand, that miracles happen every day. God often gives us gifts, that no one else can appreciate. That does not lessen their significance or their miraculous quality.

I hope I get to meet that eighth grader another time outside of school. I would like to tell him the story of the widow of Nain. I would like to talk to him about prayer. And I would like discuss with him the many times God takes care people, no matter how hopeless their situation might seem to themselves or to others. 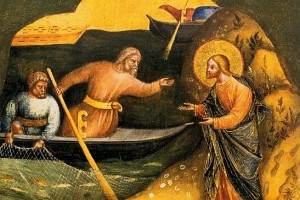