So, difficult though it may be for all of us in varying degrees to accept, God does not explain anything at all. We do not believe in God to satisfy our ignorance about the world; in short to give us a nice and comforting alternative to science with its seemingly Godless explanations and “theories.” If we are thinking like that we do not truly believe in God nor do we receive the world as it truly is. We need to start the other way round. God does not explain things, things explain God.
Archpriest Gregory Hallam | 21 December 2009 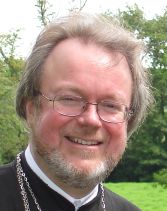 Humans have always tried to understand the world around them, if only to survive, and to value their place in it in order to enjoy life as beings conscious of death. In this context the theology of primitive animist faiths can be seen as a certain science; an early attempt to explain how things are by virtue of their familiar or indwelling spirits. By explaining natural processes both predictable and unpredictable within such a rational framework the world became safer, even tameable within certain limits. Eventually the sense emerged through observation of higher organising principles at work in the world, maybe even a “Highest Principle” and so a Supreme Spirit or High God was “born” out of an existing and enduring spirit pantheon.

Monotheist religions took these developments to their logical conclusion, ONLY the High God could serve the purpose of integrating a created Cosmos as a whole, the lesser spirits being demoted into avatars, angels and other created subordinate servants or manifestations. At this stage, however, it is still the One-God-Who-Is-One who explains how things are. If the wind blows, it is his breath. If the ground trembles and swallows you up, it is his anger. If the stars shine it is because he has provided guides both navigational and astrological for his children. At some point of mature reflection, however, most if not all monotheisms wake up to the fact that there are ways of understanding how the world works that do not involve the all too easy and, frankly, rather demeaning (to God) idea that he has to be invoked to explain the unexplained. If God only exists as a stop gap explanation for our ignorance about the world then he is no God at all. For God to be God He must be the God-of-the-Whole or no-God-at-all.

So, difficult though it may be for all of us in varying degrees to accept, God does not explain anything at all. We do not believe in God to satisfy our ignorance about the world; in short to give us a nice and comforting alternative to science with its seemingly Godless explanations and “theories.” If we are thinking like that we do not truly believe in God nor do we receive the world as it truly is. We need to start the other way round. God does not explain things, things explain God. Many fathers make this approach to the Cosmos and its Creator explicit but perhaps none more so than the great St. Maximos the Confessor. In Ambigua 33 he says:-

“The Word becomes thickened […] concealing Himself mysteriously for our sakes within the logoi of creatures and thus He reveals Himself accordingly through the visible things as through some written signatures as a whole in His fullness from the whole of nature and undiminished in each part, in the varieties of natures as one who has no variation and is always the same, in composites, as One who is simple, without parts, in things which have their beginning in time, as the One without beginning, as the Invisible in the visible, the ungraspable in tangible things.”

The key idea here is the “logoi of creatures” … what I am referring to in the shorthand of this article as “things.” These “logoi” function for St. Maximos as written signatures of God-in-creation; the disclosure of God in the being and beauty of things. So, as we discover more about the being and beauty of things through science, poetry and mystical contemplation and in so doing we discover or “explain” God. St. Maximos is clear, however, that it is Christ the Word of God, the Logos of God who is concealed and then revealed within the logoi of creatures, the self same Christ who is the Logos Incarnate. To use the theological terminology of St. Gregory Palamas, we might say that the energies of God in creation are disclosed Incarnate in the Word.

Orthodox Christians with this faith do not suppose that science or the arts are alternative truth perceptions to theology. The more we discover and know about the world the stronger and deeper in Christ revealed in the very sinews and flesh of our humanity and in the very physicality of Creation itself; its terrible and majestic glory … signatures of God, vehicles of God indeed.